Unibet are one of the biggest bookmakers in the world. The company were founded in 1997 by Anders Storm and has been a huge player in the European sports betting industry ever since. These days the brand is owned and run by Nordic OMX and is a publicly listed company.

The company are now based out of Malta, but hold licenses in dozens of countries around the world, allowing them to trade to all parts of Europe. In fact, often Unibet are widely regarded as the furthest reaching bookmaker, even managing to tie down 46 licenses in Denmark, something many have tried and failed.

The company reported a staggering revenue of £354.1 million in 2015 and with this they boast over 1,000 employees based on offices around the world. The revenue created has allowed Unibet to then pursue other companies to add to the group, with the most notable being that of Stan James and in 2012, Bet24.

Unibet may not be the most well-known bookmaker in the UK but they are genuinely massive in continental Europe and particularly in Scandinavia. With a wealth of experience serving large numbers of customers, Unibet are expanding their worldwide offering which already includes the UK and Australia.

Unibet Group plc is the company that owns the Unibet betting site. Founded in 1997 and with its operations in Malta, the holding company own and operate Maria (an online casino and bingo product), Kambi (a sportsbook operator that offers odds and takes bets for other betting sites such as 888Sport) as well as the main Unibet site. Initially the company took phone bets in the UK before expanding online with websites in different languages and aimed themselves at different markets. Anyone unaware of how far Unibet reach should know that they have close to 10 million customers hailing from over 100 countries. In other words, they’re pretty darn massive. 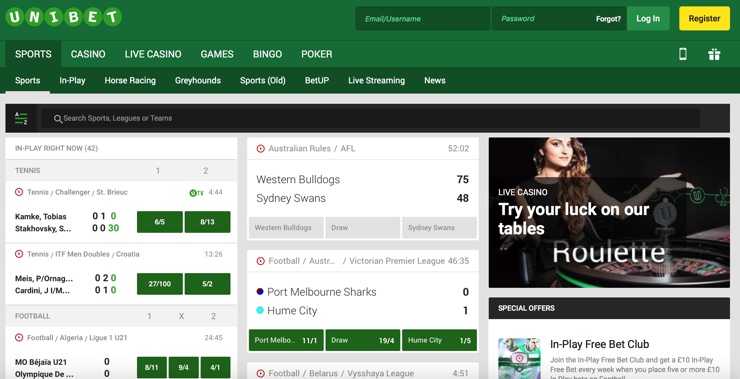 Unibet are one of the most underrated bookmakers in the industry for us. Their pricing structure is right up there with the best, although for some reason they seem to get overlooked on many sites. We compared a number of markets on the site to that of BetVictor and Bet365, finding that Unibet could more than hold their won and in a couple of cases, come out as better priced than the so called ‘best in the business’.

The market coverage has been an area where in the past, /Unibet have struggled. But, these days its much more acceptable and they include a plethora of sports to bet on. Within each sport the range of bets will vary, fairly considerably as well. Football plays a huge roll for the bookmaker, but the games are so well covered that it’s hard to really overlook the sport. We looked at some lower league games and saw hat the majority of matches had well over 100 markets to bet with Premier League games getting in excess of 250! 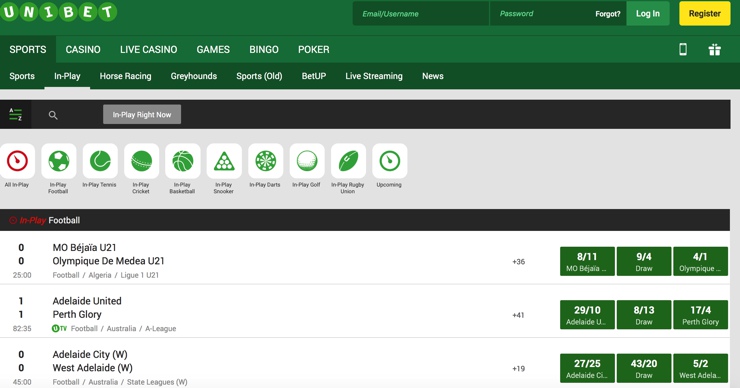 Talking of things being eye catching, it has to be said that the Unibet website is one of the best looking and most nicely designed of any online betting company. The landing page for new customers displays all the various sports and products that Unibet have to choose from with photos of popular sports stars and the latest exciting online games. Once you have navigated to the sports section of the site the distinctive green, white and black layout is easy on the eye and all the options are displayed clearly. There are shortcut links to the biggest competitions and markets and Unibet will even suggest multiples based on the most popular bets they’ve laid that day.

As the Unibet sports site gets their prices from Kambi, they do often have the same prices as some of their competitors but in general the value they offer is very fair. The vastness of their pricing operation means that they have every market you would expect from a major bookie and actually claim to provide more betting opportunities that their rivals. That does not look like bluster given by the number of sports that Unibet take bets on.

Each individual event is not only covered by a great selection of markets but also key statistics to help with your betting and a live score service that means you are never in the dark when betting with Unibet. They also have their highly impressive Unibet TV feature which streams live events from major European football leagues like the Bundesliga and Serie A along with thousands of other events from a number of different sports.

Navigating between different events and features of the site (which include expert opinion pieces and the latest sports news) is very simple but should you find you need any support it is only a click away as Unibet don’t only offer customer service on the phone they also have a live chat service where customers are typically helped within 30 seconds. Unibet have mobile apps for all the major operating systems but their mobile site functions perfectly and is a quick, convenient way to have a bet no matter where you are.

The in play section at Unibet plays a huge roll in the makeup of this bookmaker. You could argue that it’s so important the site revolves around it, but what were pleasantly surprised to see was just how in-depth it is. They create a huge number of markets to bet on form a substantial number of sports, but what we liked is that it’s so interlinked and nicely presented, it makes it a pleasure to use.

Like so many of the more successful in play sections, Unibet have gone down the route of use the three columned approach which allows you to quickly switch between matches, see betting markets and also see a live stream of that match, if applicable.

The live streaming section at Unibet is one that is growing into a massive asset for the bookmaker. At the minute it is heavily revolved around football, with a plethora of games on show from around the globe. We are informed that this is a section of the site that is going to ‘huge growth’ over the next few years as well, so we are hopeful that this continues to improve. To gain access to all live streams, you simply need to have a funded Unibet account and to be logged in.

The stats section comes direct from Bet Radar, who are one of the best in the business. You are able to see a load of information such as head to head data, past form, recent form, previous results, goal stats and team standings all from the same portal.