Slotty Vegas has been lurking round since 2014 and as a result are still widely regarded as a new online casino. But, the industry is growing so fast these days that those couple of years technically means they are almost relics compared to some!

We are exaggerating, obviously, but the site has been one that have burst onto the scene and seen almost instant success with pretty much every aspect of their online casino. Don’t be fooled by the name as well, the casino offers all sorts of games and aren’t just focusing on slots, which is great!

The casino works closely with a number of software providers that include Microgaming, NetEnt, Cryptologic (WagerLogic), NextGen Gaming, 1x2Gaming, Genesis Gaming, Leander Games, Quickspin, Rabcat, Big Time Gaming and Push Gaming. This may seem like a fairly excessive amount, but they all have their own job and together the games on offer are great, mixing perfectly with each other.

The casino is going to be accessible via their instant play feature, which means there is no need to download any casino client and you can simply dive straight into the games. You will be able to access a good range of games via the casinos mobile app, which can be accessed from any smartphone. It’s worth noting that not all casino games are available on the smartphone just yet, so make sure you check before you jump across from the desktop version.

The site allows you to quickly search for games via their search function. This is a great tool to save time trawling through hundreds of games to find the single game that you are looking for. We also liked that with each of the slots the site indicated how volatile they were. Now, we aren’t sure exactly what they base this on, but we would assume its how often they pay out, with les volatile games offering lower, more frequent payouts and more volatile games offering up higher, less frequent payouts.

The casino includes well over 200 games to choose from, which isn’t a massive amount by any means, but more than enough for most online players if we were being truthful. The range of games is actually really good and whilst the casino name might suggest that they are only interested in slots, they actually include a decent number of table games as well, although we would argue that slots is where you are going to find the largest range of games.

They do tend to offer up a fairly flexible gaming environment, adding in new titles relatively often. 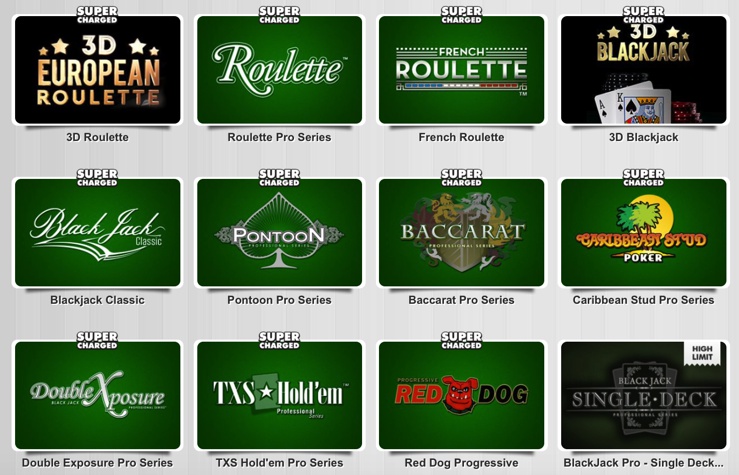 Slots is the main part of the casino and it’s here where most players will be flocking to within Slotty Vegas. The site has almost 200 games to choose from, which again isn’t huge, but certainly not terrible by any means. The quality of games is pretty mixed tough and there are some games included that we think shouldn’t be anywhere near, mainly due to how dated they are.

But, at the other end of the spectrum the better games were really good, and were particularly enjoyed the likes of Jack Hammer 2, Secret of the Stones and the classic Twin Spins, to name just a few.

As we mentioned earlier, the table games section is undoubtedly the weakest within the casino, with just 13 games to choose from. These games included Roulette, Blackjack, Caribbean Stud Poker, Baccarat and Red Dog, so all the classics were there, just not eh depth that some players will be craving for.

You will be able to choose form 9 video poker titles within the casino that includes all American, Deuces Wild, jacks or better, Joker Wild and Aces and Faces.

The Slotty Vegas casino was established in 2014 and is owned by the NRR Entertainment Group. The site was actually a fairly surprising addition, for all the right reasons. It’s small, fairly compact, but does what 90% of the online casino players need it to do.

The company are based out of Malta and are licensed by both the Malta Gaming Authority and the UK Gambling Commission.