Mobilbet have been about since 2014 and in that time have been one of the more innovative brands. The company, as you’ve probably guessed from their name, concentrates mainly on mobile betting, with their site originally being fully designed around this format. But, these days they are much more rounded and include just as good a desktop layout as they do mobile.

What’s interesting about Mobilebet is that they are apart of the same group as ComeOn Gaming, who have probably been the most successful start-up gambling site over the last couple of years. You’ll find many similarities between the two, which isn’t a bad thing, but the standout features, such as mobile betting definitely stand out more within the Mobilebet brand. The company are currently based out of Malta and are fully licensed by the UK Gambling Commission.

MobileBet have sprung onto the online betting scene in 2014 and have tried a slightly different approach than most bookmakers. Their first port of call was to release the platform on mobile, but it soon became apparent that the success of the site was dependant on having a good desktop bookmaker as well, and now they provide both to their users.

The desktop version will likely be familiar to those who have used platforms such as ComeOn, as the design is almost identical. But, they have managed to include their own twist on proceedings and with it comes a modern, clean looking bookmaker. But, the site, as the name suggest, is heavily waited around mobile betting and we feel that you get much more of a user experience from this and would be our recommendation to try out. 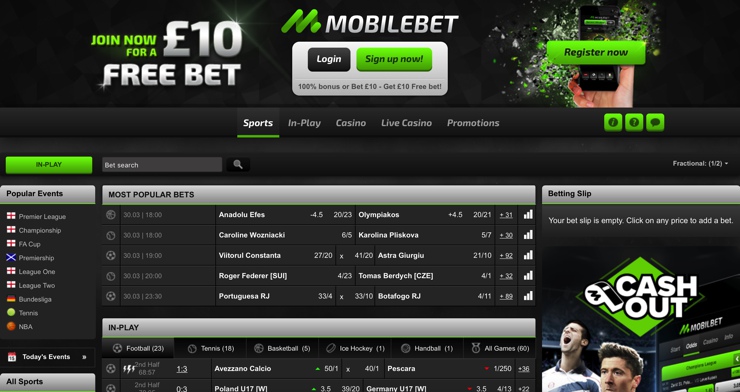 The sites in-play betting section is a strong addition to MobileBet and what we liked was the fact that it was integrated into the bookmaker. What we mean by this is that often you find these sections load up in separate page and often feel a little bit disjointed, but with MobileBet you are able to remain within the bookmaker and still place your in-play bets.

The statistics section has been a relatively new addition to the bookmaker and an area that we feel is absolutely vital for any serious punter. It’s powered by ENet Scores, who are one of the best and comes packed with data from dozens of sports. The design maybe isn’t as polished as some of their rivals, but it’s functional, so cant complain too much.

Finally we just wanted to touch upon the mobile site again, as this is really where the bookmaker excels. It’s one of the best looking in the market at the minute and what’s great is that you can access pretty much all sports and markets as well. The downside is that the live betting section is a little fiddly and doesn’t seem to update as quickly as the desktop site, which will be something to consider if you are big into your live betting. Aside from that, it’s definitely the best feature within MobileBet, which should come as little surprise given their name and what the company was originally focused around.

Mobilebet are one of the new kids on the block when it comes to online casino. The casino section of the site has only been about since 2014, which compared to some means that they are merely out of nappies. But, the brand as a whole has gone through a massive rise to success, and whilst the name may suggest that they are heavily weighted in the mobile gambling sector, they carry much more power than that and are often touted as one of the ‘ones to watch’ over the next couple years.

This review will be looking to see if Mobilebet have been able to adapt from their sports betting roots and also to see if they are able to thrive in what’s becoming a fiercely competitive industry. 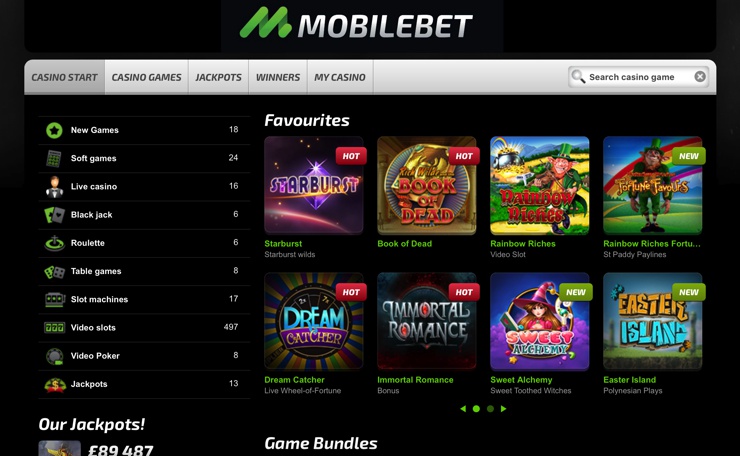 Like so many of the younger online casinos, Mobilebet incorporates a wide range of software operators to power the casino, which include Evolution Gaming, Microgaming, NetEnt, PlayTech and NextGen Gaming, to name but a few. This allows them to provide a good range of casino games and also means that the games that they have on offer come from some of the best software providers in the industry at the minute.

The casino is going to be able to be accessed via their instant play option, which means that players wont have any need to download to their desktop. As you would expect, the casino can also be played on your mobile via the casino app, which can be downloaded in the App Store and the Google Play store for free. You wont be able to play all games on your mobile, but you get a decent range and more than enough to keep you going on the move.

The casino itself offers up a couple of nice features to utilise with your time on the site, with the most popular being that of the search feature. This means you can quickly jump to your game of choice without having to trawl through hundreds of games every time. On site you can also see the latest casino news from around the world, as well as the most liked game within the Mobilebet casino.

The casino will allow you to get access to over 400 games in total, which is a really strong number. What you will find is that they are constantly adding new games and whilst they don’t have a dedicated ‘new’ section, you are able to sort games by ‘newest added’ so it makes life very easy to track down these games. 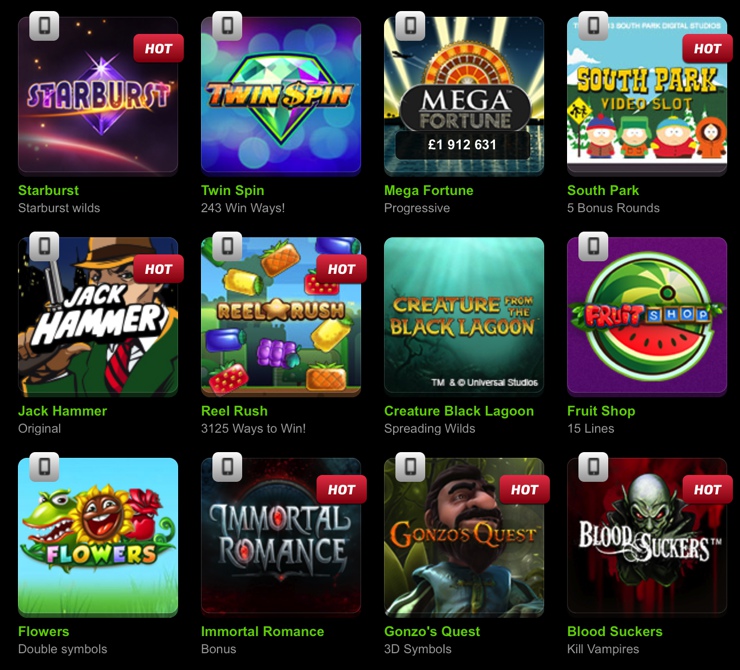 The slots section is the most densely populated section of the casino with just shy of 400 titles to choose from. It’s here where you are going to access some absolute classics from within the industry such as Starburst, Twin Spin, Gonzo’s Quest and Fruit -O—Matic. You will also be able to see that a lot of these games are actually playable on mobile as well, which isn’t always the case for online casinos.

There are 8 blackjack games on offer at Mobilebet Casino, which include classic, Pro, Single, Double Exp, Switch, Perfect, Gold and European. The quality of the games is excellent and they come from a range of providers including NetEnt, Microgaming and PlayTech, three of the best in the industry in our opinion.

The Roulette games offer up another steady stream of games to choose from and here you will be able to select from 12 different titles in total. Some of these include Pro, European, 3D, French, American and Premium.

Video poker get a decent covering, with 8 games in total that include Jacks or Better, Deuces Wild, Joker Poker and All American Double Up.

The jackpot games are what really make the casino tick for us and at the time of writing there was over £12,000,000 in jackpot money up for grabs, which gives you an idea of the scale of these games. The standout titles included Mega Fortune, Hall of Gods and Mega Moolah, each with well in excess of seven figures, respectively.

Considering the casino has only been about since 2014, the site offers up some of the best casino games that we have come across. Whilst the name of the casino may suggest they are solely mobile related, the desktop version has been adapted to be right up there with the best in the business.

Mobilebet is actually part of the Co-Gaming Limited Casinos Group, who themselves have had huge success with other brands such as Get Lucky Casino, ComeOn Casino and Kasyno Casino, to name just a few. The company are based out of Malta and hold licenses with both the UK Gambling Commission and the Malta Gaming Authority for use on their casino.