Established in 1999, Jackpot city has been designed to bring the bright lights of Las Vegas right to your own home. The glitzy site aims at providing a huge range of customers a fantastic casino experience and with that allows you to play what they state as some of the best casino games in the industry. The brand is actually a part of the Digimedia Limited Group, who themselves have been making great strides within the last few years.

As one of the oldest online casinos in existence, it will be interesting to see where the casino sits, especially given the sites vast experience and knowledge. 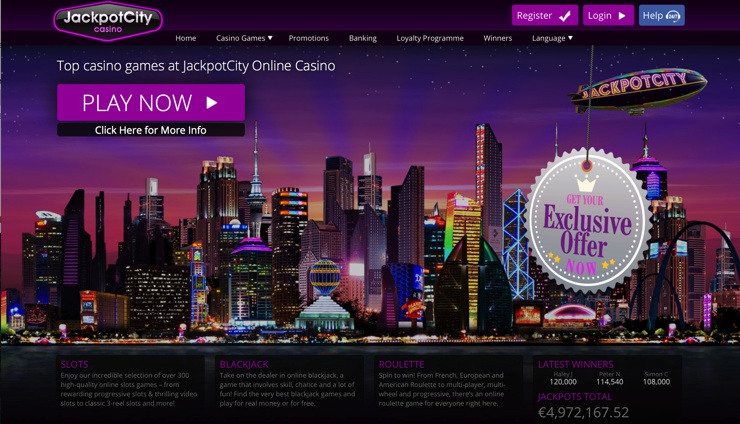 The site comes fully powered by that of Microgaming, who are one of the biggest games providers in the industry at the minute. This often means that the games you are going to playing will be some of the best, but it also means that Jackpot City can be enjoyed on a plethora of platforms such as instant play and also a download option for Windows based PC’s.

You can also access the mobile casino via their apps, which can be downloaded via the site or simply in the Google Play and Apple Store if that’s easier. The mobile app contains a good range of games to choose from, but be warned that not all games available online can be accessed via the app.

The casino includes well over 400 games in total to choose from, which is a really solid amount. As it’s powered by Microgaming you can expect to find some of the best games in the industry as well, and you are also going to be able to get first access to Microgamings latest releases, which is an added bonus. Sticking with new games, the casino currently allows you to see which games are new on site, so if you are looking for a change, then this might be a good place to start. You can expect to see a least a couple of new games introduced every month.

Slots are where the bulk of the action will occur and with this you can get around 300 titles to play on. The range of games is very diverse, especially when it comes to themes. On top of this you can access different game formats which include 3 reel, 5 reel, classics, video slots and progressive slots, to name but a few.

If you are familiar with the Microgaming line-up then you wont find anything new at Jackpot city, but that’s not necessarily a bad thing! We would recommend you try out Avalon 2, Jurassic Park, The Dark Knight Rises and Game of Thrones to start with as these are probably the best of the bunch.

Blackjack has always been a huge part in the makeup of Jackpot City, and with 27 games to choose from it’s where you are going to find a good deal of action. What’s good about these games is that you aren’t going to find any gimmicks, just variants of the classic game that have been executed really well.

Some of the variations include Atlantic City, Big Five, Double Exposure, European, Multi-Hand, Vegas Downtown, Super Fun 21 and Triple 7’s. A lot of these games can be played in both low and high stakes versions, which again adds to the flexibility of the casino.

With 8 games of Roulette on offer you may think that this section is lacking somewhat in comparison, but you’d be wrong. There is only so much you can do with a game like Roulette, so Jackpot City haven’t even tried to tinker with it. You will be able to access games such as European, French, Multi-Hand, American, Premier and Royale, to name but a few.

Video poker is another quality section for the table games at Jackpot City. With over 20 games to choose from, it’s one of the largest collections of video poker that we have come across. Games include Aces and jacks, Jacks or better, Deuces, Deuces and Jacks, along with loads more to compliment them.

The jackpot games are the most popular on Microgaming and the same rings true on Jackpot City. What you are getting is a boatload of games with some of the biggest jackpots in the industry. Ones to watch are Mega Moolah and Major Millions, two of the largest grossing jackpot games in the industry. It’s worth noting that these games are run across the Microgaming network, allowing thousands of players to contribute to those massive jackpots.

The company have been about since 1998, which means that they are one of the oldest in the industry now. Jackpot City has had its ups and down in that time and whilst they still aren’t perfect, they do offer a large range of games to a lot of players. It’s worth noting that both players from the UK and the Us are prohibited from playing on the casino, which is a bit of a shame.

They are run and owned by Digimedia Limited, who themselves are now respected as one of the leading casinos companies in the industry. Based out of Malta, Jackpot City are licensed and regulated by the Malta Gaming authority.