Red Flush casino has been about since 2008 and in that time has managed to carve out a nice portion of the online casino marketplace. The company are actually owned by Digimedia Limited and it’s these guys who are the driving force behind the brands. It’s worth noting that in the last decade or so that they have been online, Red Flush has seen some huge cosmetic changes and the site that you see today is very different – for all the right reasons – then the one that you may be familiar of.

Throughout this review we will be looking at how far the Digimedia Group have pushed the Red flush brand whilst also looking to see how the stack up as a standalone casino. 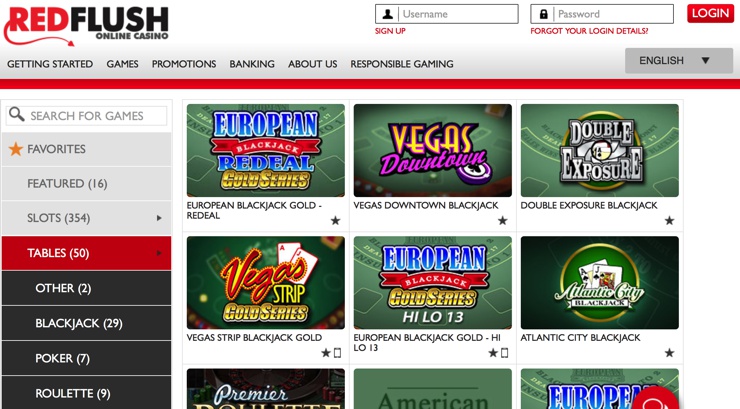 The casino is running off the Microgaming platform, which is one of the best in the world. Whilst running one software program in this day and age is almost unheard of, if you were going to just run one, it would be that of Microgaming. The sheer size of the company means that players are able to access a massive range of games, which makes it all the more inviting for potential clients such as Red Flush Casino.

The site can be accessed via either downloading the casino to your desktop or simply using the instant paly option, which was our preferred method. You’re also going to be able to get a good range of casino games straight to your mobile as well, although its worth noting that not all games are currently mobile compatible.

The site includes a couple of nifty features that you can get stuck into as well, with our favourite being that of search function. It means you can quickly look up the games of choice and find where you want to be rather than scrolling through the huge range of games that are on offer.

With well over 400 games on offer at Red Flush, you are never going to be left wanting when it comes to choice. The whole casino seems to have a real buzz to it and the games that are on offer really do compliment this component nicely. It’s also worth noting that Microgaming are constantly working on new games that get released to the casinos every month. They won’t be coming thick and fast, but it should still keep it feeling relatively fresh if nothing else.

Slots offer the biggest range of games on site with over 320 to choose from. The usual suspects are all on offer such as Thunderstruck II and Jurassic Park. But, they also have a fair few games that include folding wilds and super stacks, which add tot the depth of the range. Keep an eye out on the featured section within the casino to see the latest games that have been added for the slots range.

No one does Blackjack better than Microgaming, and with 27 different variations of the game in total, it’s easy to see why so many professional players hunt down this software. Red Flush has the full range on offer, which includes European, American, Big Five and Atlantic City, to name just a few.

With 8 Roulette games on offer there should be more than enough to keep you going. American, Premier, French and Multi Wheel are just some of the games on offer, but it’s here where you will find the Wheel of Riches game that ties into the promotion mentioned earlier in this article.

A huge selection of other games are also available such as scratchcards, video poker, baccarat, craps, keno, four by four, spingo and bingo variants.

The jackpot section includes 16 titles, but it’s the games that are on offer that make it really stand out. You get to play the likes od Mega Moolah, Mega Moolah Isis and Major Millions, which are three oft the highest grossing progressive jackpots in the industry. It’s not uncommon to see these jackpots soar past the $1,000,000 mark and to put some perspective on things, at the time of writing the casino is currently offering just over $6,000,000 worth of jackpot prizes.

Seen as though Red Flush Casino has been about since 2008, it does put them at a slight advantage over the majority of the field. The company have progressed so much over the last decade or so and now they re easily able to go right up against some of the bigger companies in the industry.

The sites owners, Digimedia are another emerging brand and they now have 15 casinos offering up casino games to players from a wide range of demographics. The links with Microgaming has been huge for them and as a result are able to provide some of the best games that we have come across.