Betway have been in operation since 2006 and have recently seen their popularity rise due to the quality of the sportsbook that they have produced. One of the most unique features to the bookmaker is that they are highly diverse in terms of the traffic that they target. This is highlighted by them holding licenses in 8 different contingencies including Malta, Italy, Denmark, Spain, Belgium, Germany, Ireland and the UK.

The sportsbook is owned by the Betway Group, who also operate casino, bingo and poker brands aside from sports betting. The sportsbook is very much their flagship however and it’s here where the company have had the most success. The group are officially based out of Malta and Guernsey, but also have head offices in London, Cape Town and the Isle of Man.

The brand is famous for getting involved with charities and also governing bodies within sports. One example of this is their affiliation with the Professional Players Federation which is a governing body protecting the interests of professional sportsmen and women.

Over the last decade or so, Betway have never been one to shy away from any advertising or sponsorship opportunities. Sports such as football, darts, snooker, tennis and more recently, e-sports have all seen the Betway branding applied to matches, races and events.

Betway are a European betting company who have recently been making waves in the UK having previously established themselves on the continent. They were only founded in 2006 but already have licenses to take bets around the world including in Spain and Italy where other, more established, betting companies have struggled to gain a firm foothold.

Betway have offices in London, Malta, Australia and South Africa proving their international appeal, which is boosted by their attempts to allow customers to “bet your way”. They claim to have been founded by a “group of sports fanatics” and it is clear that they take customer experience and satisfaction very seriously.

Having begun with the aim of offering sports betting markets both pre-play and in-play, Betway now offer a number of different products including casino and games products which allow customers the chance to win some truly massive jackpots. 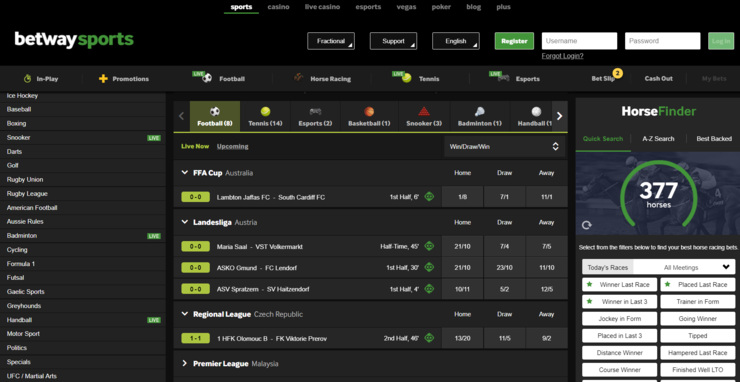 Betway have arguably been the most improved bookmaker over the last decade or so and they are now a real alternative to some of the more established brands. The best way to describe their pricing structure, on the whole at least, is fair. Whilst this doesn’t exactly set the industry alight, you’re always going to be getting a good price, no matter which market that you choose. Football, tennis and horse racing play a huge role, but it was sports such as baseball, basketball and American football that we really felt the bookmaker start to compete.

The range of sports and markets is comparable to any of the best bookmakers in the business. We found that there was little if anything that we thought was missing and if you are a punter who likes to bet on a variety of sports throughout the year, then Betway could be a great match for you. One thing that did catch our eye was their ever increasing market of e-Sports bets, with an absolute ton of events and tournaments to bet on, making them one of the best bookmakers for e-sports in the business.

With Betway’s attention-grabbing claim to offer their customers more ways to bet than the competition you would expect there to be a massive selection of markets on the site and they do not disappoint. The firm claim to offer 30,000 markets on their betting site at any one time and the number of opportunities to bet on different sports and individual events is certainly mighty impressive.

With all those markets available you would think that navigation could be a problem but the design team at Betway have done an incredible job on their main site. With the white text on black background it looks great and there are quick links available for the most popular sports, competitions and events. Current in-play matches are displayed along with score information on the homepage and there are even links to popular coupons such as both teams to score. Betway have both an Insider Blog and a news section to keep you in the loop before placing a bet. The mobile site is just as well put together in terms of design and coverage and all the Betway promotions can be claimed on the move as well.

Betway have a very comprehensive live streaming service which covers the most popular European sports, horseracing and tennis matches. Placing a bet whilst watching a stream is simple thanks to the betslip which is always available on the right hand side of the page. In short, Betway appear to have all bases covered for the discerning punter.

The in play betting section at Betway is actually pretty impressive, with a good range of sports to bet on. Football takes the stranglehold over most, but even outside of this you get a really good range. The number of sports of offer ill vary, but Betway claims that over 80% of their markets turn in play, which if true, is a huge number!

What’s really great about this section is that you are able to use the match centre that is on offer to get a feel of how each game is running. Statistics here include corners, yellow/red cards, dangerous attacks, shots and of course, the latest score and time of match.

Live streaming is on offer at Betway and all you need to access it is to have a funded betting account. The number of games on offer is a good amount, without ever being huge, in comparison to some. But, they do offer a ton of quality sports and leagues, including the Bundesliga in Germany, Russian Ice Hickey, ATP Tour Tennis, Euro Volleyball and Russian Premier League football.

Cash out is on offer at Betway and can be sued for most bets that you place. The market will need to be included in the in-play section to qualify for a cash out bet and there is no partial cash out option unfortunately.

Betway run a loyalty program for all customers on the site. Basically, the more you play, the more you are going to earn. There are 6 levels in total that include blue, bronze, silver, gold, platinum and black. As you work your way up you will be able to claim more offers and promotions from the bookmaker. Some of the potential benefits include executive hosts, invites to worldwide sporting events, exclusive gifts, invitations on VIP trips, customised offers and priority withdrawals.

Betway use the Bet Radar platform for their statistics and with this you are gong to be able to find a really good range of sports to get data from. In fact, it’s one of the biggest ranges in the industry, with everything from American Football to Water polo and everything in between.

Betway has become a bit of an ‘it’ brand in the online casino industry. They seem to be the face of pretty much of everything at the minute, from sporting events to gala dinners. The company have seen a sharp rise in their success over the last couple of years, but you may be surprised to hear that they have actually been in the industry since 2007.

Whilst it’s fair to say that Betway have some time before the catch the likes of bet365 and 32Red, the company are moving forward at an alarming pace, mainly down to their ability to simply offer their users exactly what they want.

Betway is fairly unique in that they only use one software provider in Microgaming. For a long while they did actually use more than just one, but in more recent years they have teamed up with Microgaming to provide exclusive player experience. The partnership also means that they get first pick of the games that the software provider offers them, making sure they keep their catalogue of games bang up to date.

The software is available via instant play on your desktop browser. It can also be accessed via the mobile app that is downloadable from the App Store and accessible via your smartphones browser for all other use. The software will also allow you select your favourite games and keep them in a dedicated tab, along with a search function which saves a lot of time trawling through the seemingly endless list of games. The site also allows you to access demo play for all games on offer, meaning you play without investing real money to get a feel for how each game works.

The casino includes over 400 games in total, which is a really solid amount. The ability to tap into Microgamings vast catalogue of games has allowed Betway to pretty much hand pick which games they choose. What you will find is that games come and go quite regularly, but you can keep up to date with any new games on site simply by selecting the ‘New’ tab.

It will probably come as very little surprise to hear that slots is the biggest distributor of games at Betway and with that you get around 300 titles to choose from. The games on the whole are excellent and for those of you who are familiar with Microgaming, then you will see some familiar faces such as Gold Factory, Jurassic Park, Avalon II and Immortal Romance. What’s been impressive to see though is that Betway offer up a fair few slots that other casinos that solely use Microgaming don’t. The reasoning behind this we aren’t sure, but we know that variety in what’s an increasing competitive environment is always a positive for us.

You’re going to be able to choose from 28 blackjack games in total, which is a ridiculously high number compared to most. The games are all really cool as well, with some that we were testing for just the first time. The Vegas Downtown and the Super Fun 21 game are two of our particular highlights, but it also includes favourites such as European, French, American and even Spanish variations.

The number of roulette games don’t quite compare to blackjack, with just 10 variations on offer. There are other casinos that do offer more than this, but to be honest, 10 is about right for a really nice mix. Games such as Premier, European, American, and Diamond Edition titles were all well thought through and brilliantly designed. You’re also going to be able to access the Live Immersive Roulette games, which are great fun.

There are 23 variations of video poker on site, which is again one of the largest selections that we have come across. The quality of games do tend to vary here however, but then you do kind of expect that with the simplicity of video poker.

Microgaming focussed online casinos always seem to have a really good range of jackpot games, and Betway is no different. There are 14 titles to choose from in total but the big hitters are all there, such as Mega Moolah, Major Millions and Treasure Nile.

In fact, Betway hold the record for the largest payout form any online casino when a British Solider managed to take down the jackpot on the Mega Moolah slot, bagging himself a cool £13.2million!

The Betway group have been about since 2006 and it only took them a year to tap into that of online casino. The company are probably better known for their work in the sports betting industry, especially with sponsorship deals in place with the likes of West Ham United and Premier League Darts.

The company are a truly global affair and whilst based out of Malta and Germany, thy actually hold licenses in the UK, Malta, Italy, Denmark, Spain, Belgium, Germany and Ireland. What’s been impressive to see from Betway over the last decade or so is their willingness to improve, with both casino and sports having several major re-designs and re-brands in that timeframe.