Euro Palace have been about since 2010 and in that time have managed to carve out a nice little section of the online casino marketplace for themselves. The site is fairly unique in that it’s only powered by one software provider in the form of Microgaming. They are currently part of the DigiMedia Group who are one of the best at the minute and seem to be really upping their game when it comes to the quality of their portfolio.

Throughout this review we will be looking at how well the casino performs when compared with the competition around them. 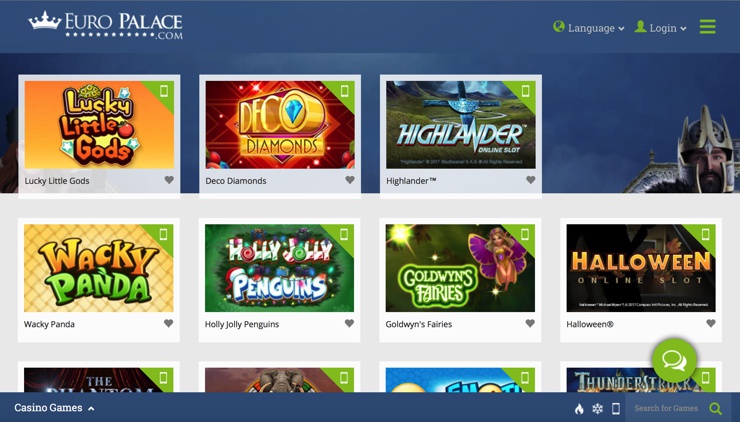 As we mentioned briefly at the top of this article, the site is powered by one software provider in the form of Microgaming. This may seem like it puts them at a disadvantage over their rivals, but for those of you who don’t know, Microgaming is one of the biggest and most successful software providers in the industry, allowing euro Palace to offer up a great range of games.

The casino can be accessed via their desktop browser based version or you can also download the casino to your Windows based computer. On top of that, there are a plethora of games available on their mobile casino, although it’s worth noting that as of yet they don’t include all games, so it’s worth checking before you switch across.

The casino will allow you to play demo versions of most of the games on site, which si great if you are new to online casinos or new to a particular game. You will also be able to use their handy search feature to find your favourite games, which being able to see which games are currently hot or not.

The site includes almost 500 games in total, which isn’t too far away from the maximum amount that Microgaming have in their catalogue. It’s worth noting though that their are some omissions from the full range, which is a good thing as it means that Euro Palace have selected the games that they want to include rather than just dropping in the full package, which would have been much easier to do. 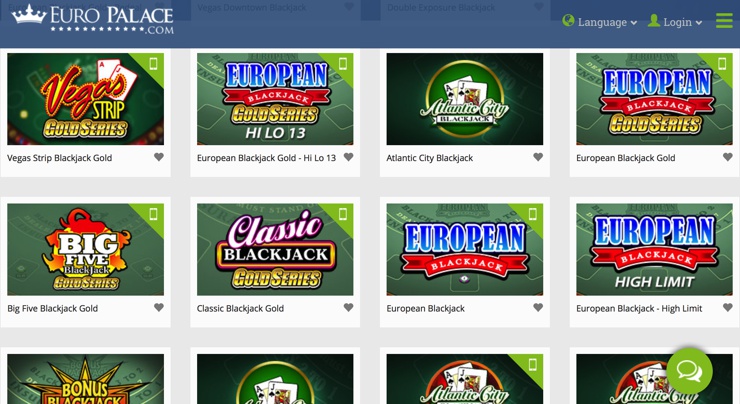 With 324 slots on offer throughout the casino, it’s safe to say that you are going to be getting a massive range of games to choose from. The variation in titles gives a diverse feeling within the casino and for those of you whoa re familiar with Microgaming, will be able to find some of the many classics that they have released over the years including Thunderstruck II, Tarzan and Jurassic Park.

If you’re looking for a new challenge then we would highly recommend checking out Wild Orient and Fish Party, both offering up some of the best bonus rounds that Microgaming have to offer. It’s worth noting that you will often see fresh games hitting the casino fairly often, as and when Microgaming release them.

Microgaming are the kings of Blackjack and with 27 different titles to choose from on Euro Palace, you’re never going to be short of a game to play. The quality for each game is really high and it’s clear that they have spent a good bit of development on the design as whilst there is only so much that you can do with Blackjack, the games all feel slightly different, which is great.

With 8 games of roulette to choose from, it may seem lacking compared to the likes of Blackjack, but there are more than enough variations to choose from to keep you going. These games include American, Multi Wheel, French and European to name but a few.

The video poker section at Microgaming has seen huge development over the last couple of years and now boasts and incredible 24 games to choose from. We think that this is the biggest in the industry and if it’s not, it’s very close.

The Euro Palace casino will no disappoint when it comes to jackpot games either, with 16 different slots on offer. The big hitters include Mega Moolah, Mega Moolah Isis and Major Millions, with each of these games comfortably surpassing the 7 figure mark.

As Euro Palace has been about since 2010, in the current climate it actually makes them one of the stalwarts of the online casino industry. The company are licensed and based out of Malta and over the years have won several awards for their efforts within the casino sector.

The company are owned by DigiMendia Limited, also based out of Malta, and it’s these guys who are essentially the driving force behind the Euro Palace brand. They currently have 15 casinos in their locker, including the likes of Lucky Nugget, Gaming Club and 7 Sultans Casino.