Buzzwords such as ‘quirky’ often get thrown around quite liberally in the online gaming industry as companies strive to find a little niche in the market that they can exploit. Mr Green is actually one of the few casinos that fit this bill, with a totally unique looking casino and just a general aurora about them that’s different the ‘norm’.

The company took a while to really infiltrate markets outside of their native homeland of Sweden and even though they have been about since 2008, they still feel like a fairly new online casino to the majority. That is, until you really get a look inside and it’s only then that you can tell that Mr Green are moving forward in what can be a fiercely competitive environment. 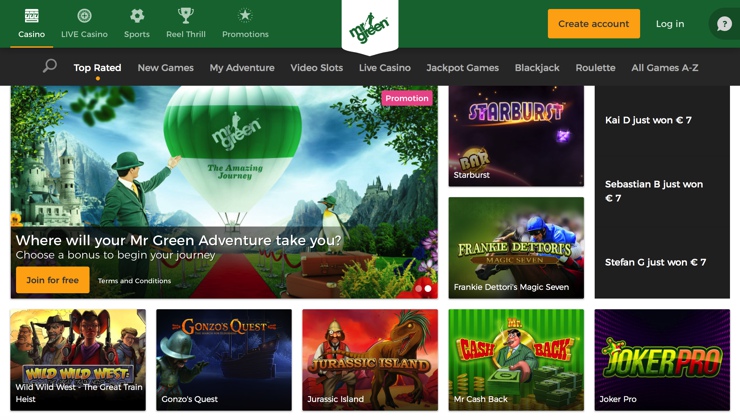 The Mr Green casino actually taps into quite a few softer providers to offer their customers a unique online casino experience. These providers include Betsoft, Boss Media, Evolution Gaming, IGT / Wagerworks, Microgaming and NetEnt, all of which are some of the leading software providers in the industry. The casino can be accessed via your desktop using the instant play, browser based option and also via your mobile with the dedicated downloadable Mr Green app. It’s worth noting that the app is absolutely brilliant and one of the best that we have come across. It includes a vast number of games and was actually voted Best Mobile Casino 2016 by the Gamer Awards.

Whilst the site has a familiar feel to it, it’s actually very unique in its design and we loved the fact that it was very easy to search for your favourite games using the search function, and also chop between the different categories of games that are on offer.

The casino boasts just over 500 games in total, making it one of the largest in the industry. Whilst it may seem like this is a pretty large number, at no point does it feel overwhelming and the range of games definitely were all of excellent quality. We were also impressed at how often they removed titles from the casino, getting rid of the dead wood, if you will.

New games can easily be seen from the ‘New Games’ section at the top of the casino and we noticed that a lot of these were also available for use on their mobile app as well, a trend that Mr Green seem to be entertaining at the minute, which makes sense.

Slots are where the main action on the site happens and with this you get around 400 games to choose from. With so many on offer, you are definitely going to find something that will suit you, although it was here were we found the biggest mix in quality, with some being brilliant and others being poor at best. We enjoyed seeing some familiar faces on offer such as Starburst, Big Bad wolf and Flash, along with some newer titles that we hadn’t come across before such as Spectra, Hugo and Sunset Delight.

You can select from 18 versions of blackjack in total, making it more than adequate for the majority of online casino players. Some of our favourites include the 6 in 1game, 21 + 3 games, pro series, VIP tables and also the Lucky Lucky games (but fetch your wallet, as these can start to get really expensive).

Roulette games are equally well catered for at Mr Green, with 21 variations of the popular casino game. They include their live roulette offerings in the standard casino, which works well, but on top of that American, double ball, bonus spin and Mr Green Exclusive roulette are the games that you need to be looking for.

You’ve got 16 jackpot games to choose from in total, which is about the norm for a casino such as Mr Green. They do include the famous Mega Moolah, Hall of Gods and Arabian Nights, all of which will usually have well in excess of £1million for each jackpot.

Mr Green has had a plethora of jackpot winners over the years, but none bigger than the £2million that was won in 2015 on the Siberian Storm Mega Jackpot game. The prize went to a lucky winner from Stockholm, Sweden who said at the time “it took me a while to understand that it was for real”.

Although originally from Sweden, Mr Green now resides in Malta where the 1000+ workforce are mostly based. The company have risen from pretty humble beginnings, before working their way to the top casino in Scandinavia, not long after their introduction in 2007.

3 Swedish businessmen in Fredrik Sidfalk, Henrik Bergquist and Mikael Pawlo initially launched the company and whilst only 2 of them had iGaming experience previously, the company were already winning awards just 12 months after the casino had opened their doors.

Over the coming years the company kept increasing turnover year on year and now have aquired several companies to increase even further, such as Mybet Itlaia in 2015.