Prospect Hall is one of the more unique online casinos in the industry. They have been about since 2015, but the company are actually based on a brick and mortar casino run by Betable Limited. What’s been interesting to see from Prospect Hall has been the company’s ability to keep changing and moving forward, especially given that they’re still relatively young.

Throughout this review we will be trying to see if they are able to keep moving forward at their current pace and also if they are going to be able to really push on and challenge some of the bigger names in the online casino industry.

One of the highlights for the casino has to come in form of the software providers that they use. These include Microgaming, Net Ent, NYX, IGT and Play’n Go. What’s great about this range is that they each specialise in a different area with Net Ent being great for state of the art slots and the likes of Microgaming and IGT offering up a great all-round package of casino games, including table games.

You are going to be able to access the casino via your browser on their instant play casino, which means both Mac and Windows based PC’s will get the same playing experience.  On top of that you can play games via your smartphone as well, although the range is somewhat limited to that of the desktop version.

The site allows you to quickly jump between games within their search function and also using their detailed menus found down the left hand side of the casino. We also liked the fact that you could see which games have been recently added via the ‘New’ section, which updates quite regularly.

In total you are going to be able to access around 250 games, which isn’t a massive amount. It’s actually been quite interesting to see such a small amount given how comprehensive the software providers they are working with are. But, this does highlight that Prospect Casino aren’t just adding games into the mix for the sake of it and actually choosing which games they want to include that they think will add value to their punters. 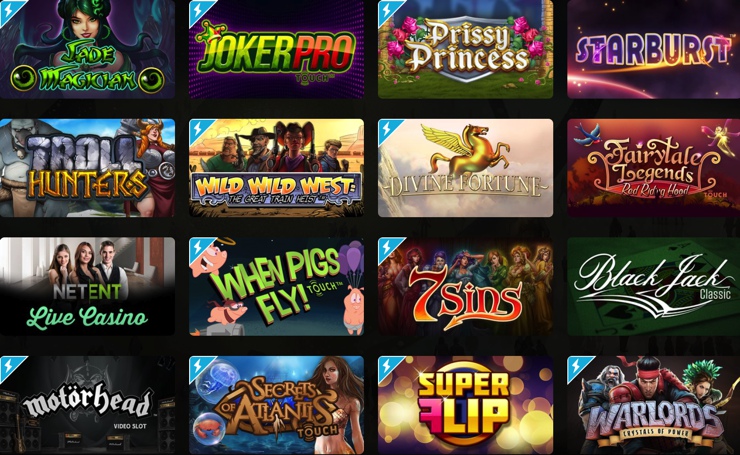 The slots section is where you are going to find the bulk of games within the casino and with it you are going to be able to play a good range of both branded and non-branded slots. We found that titles such as Deal or No Deal, Guns N’ Roses, Starburst, Aloha and Motorhead were the best on offer.

Overall the quality of games in this section was very good and you can tell that they have strived to make this a feature packed section of the site.

With 16 different games of Blackjack to choose from, you’re never going to find yourself too far from the games that you love. They included Classic, High Limit, Touch (mobile), Single Deck, European and Double Exposure, to name but a few. Some of the games are repeated, but are taken from different software providers so do include their won twits on things.

Roulette follows a similar tune to blackjack in that you can play on a wide range of games (14 in total) that include European, Fishing, 3D, American, French and High Limit. Again, there is some crossover between software providers with similar games, but are designed slightly differently, so well worth checking out still.

The jackpot section is very well stocked with 24 different options available to you. This is where we feel the association with so many of the larger software providers really pays off as they include games such as Arabian Nights, Britain’s Got Talent, Life of Brian and Who Wants to be a Millionaire.

The Prospect Hall brand is owned by Betable, and whilst they have only been about since 2015, the Betable brand have actually been making casino sites since 2008, making them one of the longer running networks in the industry. They actually started life as a mobile casino and it was this section of the market that the company wanted to attack with Prospect Hall, but they quickly realised that whilst mobile is the future for the brand, they needed an online presence to accompany that and created an online offering as well.

They are currently based out of London, England and are spearheaded by businessman Christopher Griffin. It’s Griffin who started the Betable brand and have managed to create huge profits over £23 million from funding other ventures within the gambling ad technology workspace.