Casino Luck is one of the most popular online casinos in the industry. Whilst the brand have been about since 1999, it’s probably better known now for it’s 2011 facelift and from there the company has gone from strength to strength.

They are owned Minotauro Media Ltd and it’s these guys who have been the driving force behind the re-brand and also the success that the casino has seen over the last couple of years. It’s worth noting that Minotauro Media also owns Next Casino, another thriving online alternative, highlighting just how successful these guys are becoming.

The site can be accessed by your browser and the instant play version of the casino is super fast and super reliable. You will notice that there is no download version for desktop use, but you will be able to download their casino app from the App Store for iPhone and by accessing the casino via your browser for Android phones.

There are currently 663 casino games in total across the site, making Casino Luck one of the biggest casinos in terms of sheer volume of games. The site comes jam packed with a range of games and whilst he quality of some games do vary, the majority that are there are were excellent, with some familiar faces such as Starburst, Drive, Guns N’ Roses and Dragon Dance.

You are able to see which games have been added recently by via the ‘Newest Games’ tab, which is great to see how fresh the casino is. At the time of writing there were 5 new titles on offer, but it’ been reported that they tend to add around 10 new games each month, which is a good amount. 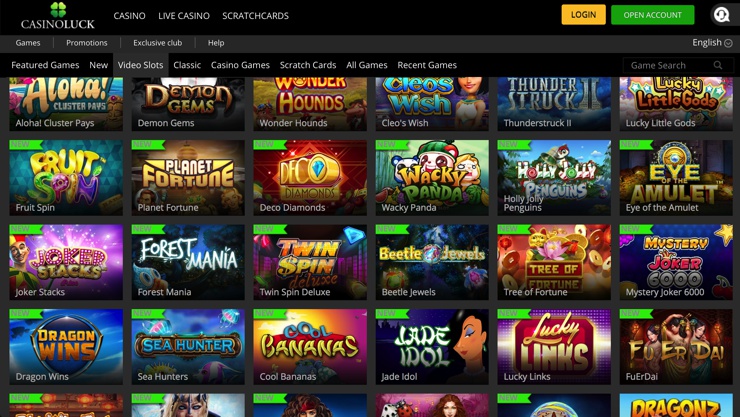 Slots are where the bulk of the action lies and for this you are going to be able to paly over 520 titles. As we mentioned earlier, the quality of the games do vary, but the vast majority of them are of a high quality. You’re also going to be able to play over 30 classic slots titles as well.

There are only 4 variations of blackjack available to play on site, which compared to the competition, is fairly low. You can choose between multi hand, blackjack series, single deck and then Pontoon. Whilst the range of games were poor, the games on offer played out really well, especially enjoying the games of pontoon on site.

Roulette holds up much better than blackjack and with this you are going to be able to target 11 different games. These include American, European, 3 Wheel, English, French, Double bonus spin and Triple bonus spin, amongst others.

There are 14 jackpot games on offer at Casino Luck, which offers up a really strong range. The games on offer are mainly made up of network jackpots, which mean that players from other casinos will be playing the same games. This works well for jackpot games as it means the jackpots on offer will increase quicker than if they were simply on Casino Luck due to the limited exposure they would get. Some notable titles include The Dark Knight, Wow Pot and Arabian Nights, all of which have jackpots of over £2million at the time of writing.

After being founded in 1999, the company have gone through a series of major changes. The biggest, as stated earlier came about in 2011 when they had a massive re-brand and basically changed pretty much everything about how the site looked and how it operated. We mentioned earlier that the company included a host of software providers, well this has been the driving force behind the huge range of games that they currently have on offer.

The company are based out of Malta but are governed by the UK Gambling Commission, of whom they hold their online gaming license with. Casino Luck, as you may guess from both the name and the design of the site, originated from Ireland and it’s here where their owners, Minotauro Media Ltd, are from and still based today.