The company have been about since 2005, but it was in 2007 that they really started to make a move in the industry. The state on their website that they were the biggest bookmaker in Germany and whilst we cant confirm or deny this, from what we have seen over the last few months, we can understand how they would be right up there with the best.

It was in 2010 when they invited German Racing to become shareholders in the company where the structure for what you see today really started taking shape. The company have since moved from Germany and are now based out of Malta, but are licensed by the UK Gambling Commission along with the Malta Gaming Authority. In 2012 they took another step towards racing supremacy by offering both UK and Irish races and now you will find an absolute plethora of races on site as a result.

Racebets is one of the more unique bookmakers in the betting industry, mainly because they solely concentrate on the horse racing side of the market. The company have expanded since they firs t came onto the scene as one of Germanys biggest exports in 2005, but by narrowing down the range of sports they offer, almost completely (!), they have gone on to become one of the biggest horse racing betting sites in the world. 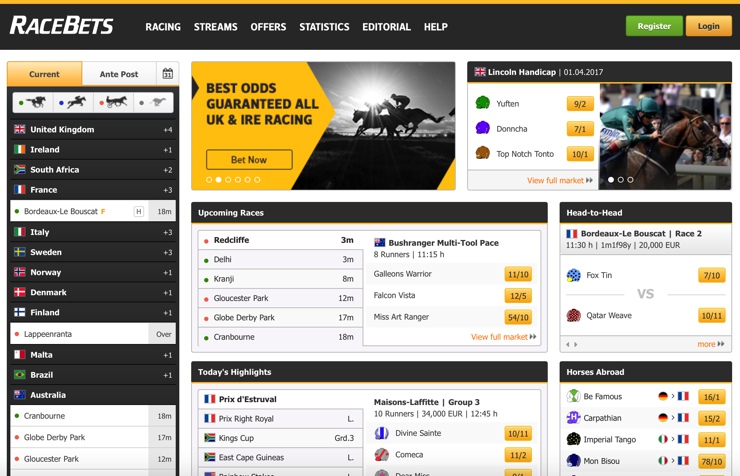 Due to Racebets only concentrating on horse racing, the bookmaker is able to really target certain races and meetings to offer some great odds. When we compared these to the likes of bet365 and Coral we found that Racebets could more than hold their own and even bettered a number of bets that we compared. We did find that the site was fairly inconsistent with it pricing, where one market could literally be best priced and then another could be ranked pretty terribly. It seems fairly erratic like that, but as long as you have a look about, you can find some great value from the bookmaker.

When it comes to market converge, obviously we only have horse racing to go on with Racebets, but we must applaud them in what a great job they have done in covering the sport. You can bet on races from around the world including UK, Ireland, USA, South Africa, Australia and many more places. We were actually a bit overawed by the sheer number of races that are on offer and if you are a dedicated horse racing punter, then you simply must try out Racebets. 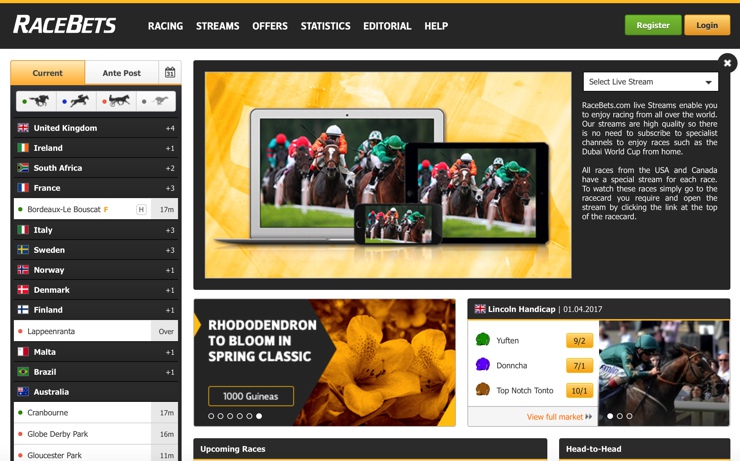 The first thing that really jumps out at you when using the Racebets site is just how many races the bookmaker covers. They have races from France, Germany, Italy, Norway, Malta, Australia, US, Canada, Mexico and of course, the UK and Ireland. Whilst the latter two are common practice for most bookmakers, the rest of them can be really hard to come by, so works great if you want to target slightly more niche horse races from around the world.

We really enjoyed the layout and design of the Racebets site, which includes a simple structure but one that works well. You can quickly navigate between each race that you are betting on and from there see which races are available for each meeting.

The information on site is very substantial also, and we found it easy to not only make a selection on each race, but also form a reliable bet by including some of the form and data on site. In fact, you can even jump across to the Statistics section where you can get a run down on pretty much any horse that has raced around the world. The same can also be said for that of jockeys and trainers, which really adds a great element to to the site, outside of simply placing your bets.

We mentioned above about the ‘other promotions’ on site, but in all honesty, this was just a handful of the range on offer. A lot of them targeted upcoming races and meetings, but for pretty much all of the major ones, there was an offer to be had. For example, recently at Royal Ascot punters were able to get a 5% boost on their winnings if they backed more than one winner throughout each day. It doesn’t sound much, but if you think of it as  a 5% odds increase, then it really starts to stand Racebets alone when it comes to pricing.

A final word on pricing; we found the odds on offer to be at worst, competitive, but on the whole really rather excellent. Comparing them with bookmakers such as bet365 and Ladbrokes they were as good as, if not better with some horses. They also highlight which bets are currently the most profitable on site, with biggest winners for that day, again adding to the depth of the bookmaker.

The live streaming section at Racebets is one of the best in the business. What you are getting is a ton of races from around the world, including South Africa, America and Canada. The only thing lacking is any stream of UK or Irish races, which is usually a given for these types of bookmakers. That being said, all streams are free to get your hands on and with that comes a ton of races around the clock.

The statistics section at Racebets might just be the sole reason why you sign up with an account with this bookmaker. As the site is horse racing based, obviously all info is regarding horse racing, but the back catalogue of information that is on offer is simply staggering. You can literally just punch in the name of the horse of jockey and then you will have access to a plethora of information including last performances, race records, general information and trainer/breeder information.