Gala casino is widely regarded as one of the biggest brands in the business. They’ve been in the industry since 1991, but mergers with the Coral bookmaker in 2005 has propelled the company from being a land based middle of the road casino, to one of the biggest gambling groups in the world with a reported revenue in 2012 of £1.2 billion.

One of the ways that Gala has become so successful is by being very diverse in their approach to the industry. It’s probably fair to say that in the early days they were better known for their foray into the bingo world, but now, with over 30 brick and mortar casinos dotted around the UK and an increasingly popular online outlet, the company look set to dominate one of the most competitive markets in the gambling sector. 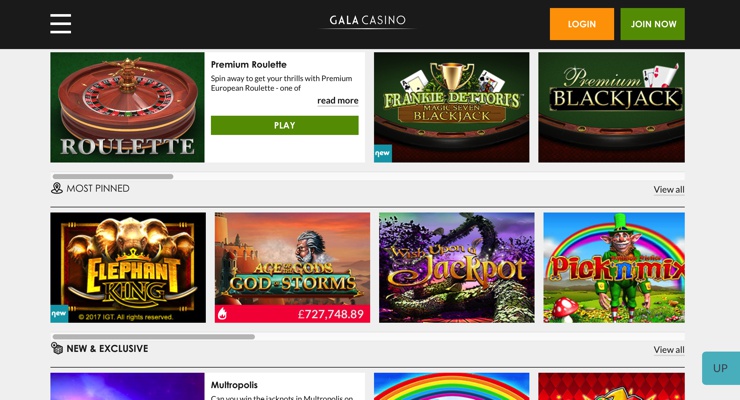 Gala are affiliated with a plethora of software providers, in fact they are renowned for having one of the largest collections in the industry. The providers include Amaya, Ash Gaming, Blueprint Gaming, CryptoLogic, Electrade, Endemol Games, Evolution Gaming, IGT / Wagerworks, NextGen Gaming, Playtech, Push Gaming, Quickspin and WMS. The range of providers means that they can choose from a huge number of games and they even have a downloadable version for Windows based PC’s (not mac) as well as their browser based online casino.

The casino can also be accessed via your mobile and users of iOS devices can download the app directly from the App Store. All other devices can still access the same mobile casino, but you will have to do this via their smartphones browser, which will automatically redirect you to where you need to be.

A pretty neat feature of the software allows you to use an internal search for your favourite casino game, which is handy when there are literally hundreds to scroll through. You can also save favourite games within the downloadable version, although this doesn’t appear to be doable from the browser based casino.

In total you’re going to get around 400 games to choose from within the casino, which is a really solid amount. We know that they have an awful lot more than that at their disposal from the software companies that they use, so Gala have clearly gone out of their way to hand pick the games on offer to maximise user experience. The range of games do tend to change quite often and it’s been reported that they often remove older games that aren’t being used as often as they may like to make way for newer titles. 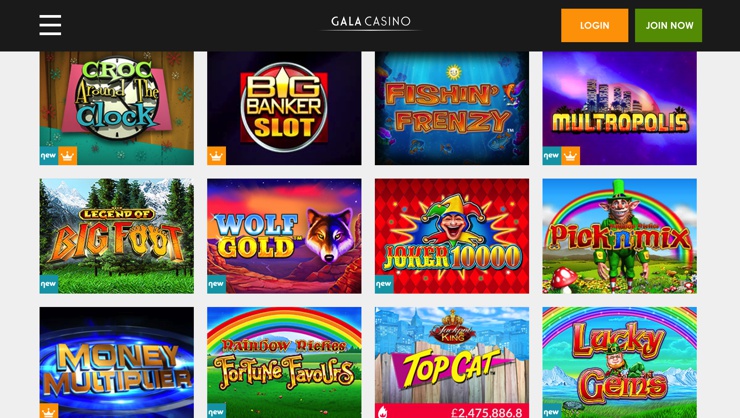 Well in excess of half the total number of games at the casino are made up of online slots. Due to the number of software providers on offer, the slots is probably the most diverse range on site and it’s also here where they chop and change the most, adding in new titles on an almost weekly basis. Some of the standout titles include the likes of Spiderman, Iron Man 3 and The Avengers.

You’re going to be getting about half a dozen blackjack games to choose from on the site, with a really nice mix as well. You obviously have you standard blackjack game, but variations will include multihand, double attack, surrender, American, perfect and Blackjack switch.

Roulette is one of the most popular games at the casino and it shows in the number of games that are on offer. You will be able to choose from around a dozen variations, including premium, penny, Marvel (jackpot), Premium pro, 3D, American, video, 3D premium, live and European.

You’re going to be able to choose almost 50 different jackpot games throughout the Gala casino, which again, is one of the best ranges that we have seen to date. The numbers of some of the games will easily get into the millions of pounds and the range of games aren’t exclusive to slots either.  You get jackpot roulette, blackjack, football games, poker and Caribbean stud, to name just a few.

Some of the biggest jackpot wins have occurred at the Gala casino with a cool £1.2 million snagged up by one lucky punter playing the Cleopatra slot in 2013. On top of that, there have been several wins of over £600,000 with Gala thought to be one of the luckiest for these types of games.

The Gala Group have around 25 land based casinos to speak of these days. The number has come down somewhat over the last decade or so, with the smoking ban being one of the main reasons why Gala have streamlined their casinos. It’s worth noting that they own over 140 bingo halls, as well – of which many have casino facilities, although aren’t strictly run as a land based casino.

Gal has been around since 1991 and whilst the company have a rich heritage in the bingo sector of the industry, they have run many land based and now online casinos in that time. The merger with the Coral Group (renaming the whole company Gala Coral Group) in 2005 was a huge step for them and following the merger valued the company at £4 billion.

Throughout the years the group have gone from strength to strength, with a number of high profile acquisitions of companies and assets along the way. What’s probably most mind boggling about the whole process is that casino isn’t the biggest factor of the group with sports betting (Coral) and bingo (Gala) arguably being the groups ‘bread and butter’ if you will.

What cant be denied these days though is that company are as influential within the casino world as any and look set to continue this massive upward curve they seem to be on.