The BetOnBrazil bookmaker has been about since 2016. It actually launched during Euro 2016 and since then the bookmaker has made steady progress within the industry. You may think that the name ties in the country Brazil, but in fact it’s actually based around the Scottish footballing legend, Alan Brazil. It ‘s a strange partnership, for sure, but one that’s seen recent success, so who are we to judge?

Throughout this review we will be looking at what the bookmaker has to offer and even though they’ve been around for a relatively short period of time, seeing how they compare to rest of the competition.

About Bet On Brazil

Over the last couple of years there seem to have been a plethora of new sportsbooks that have sprung onto the scene. Bet On Brazil is just one of those, but it comes with a twist! The company are actually spearheaded by that of Scottish Football legend, Alan Brazil. Unlike most partnerships, Brazil is more than just a face to try and promote the brand, but instead he has worked with the team to make the sportsbook as user friendly as possible.

The Bet On Brazil Brand is part of the Argyll Entertainment group, who themselves are one that are continuing to grow. The company are part of a larger operation in that of AHG Group, who are based out of the USA. What you’re going to find from Bet On Brazil is a bookmaker that are trying to put the punter first, mainly in the form of a wide selection of markets and bucket load of promotions to choose from.

The pricing structure at BetOnBrazil took us a bit by surprise to be honest, but in a good way! They are very competitive and the reason behind our surprise is that you never really see or hear about them when comparing odds on some of the larger odds comparison sites. We wouldn’t go as far as saying that they were consistently the best in the business, but certainly for football they are right up there with the best and we wouldn’t have any hesitations in using them on a more permanent manor for our bets.

The market coverage is good, without ever really being great. They cover a good range of sports, but what we liked is that the sports on offer were all really well catered for. Obviously the likes of football, horse racing and tennis are going to be getting the largest coverage, but this is the same as pretty much any Euro facing bookmaker. Outside of the big three other sports do vary quite dramatically, but again, this isn’t uncommon for a bookmaker of their size and age. 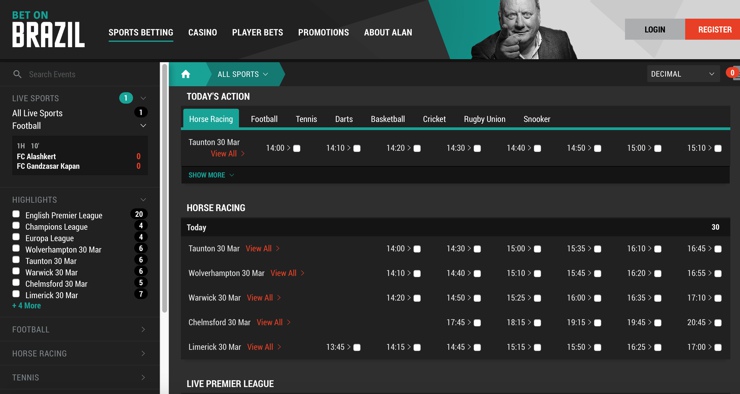 The first thing that really jumps out at you within the bookmaker is the design. It looks fantastic! In fact, we would go as far as saying that it’s one of the cleanest bookmakers we have come across. Companies often try too hard to make their site look ‘snazzy’ but to be honest, the majority of punters just want to be able to quickly navigate to their bets and then be able to easily track them. The bet slip is one that is concealed, but accessible and the menu system down the left hand side of the bookmaker is very functional.

The in-play betting section is another big tick for us and it again includes the clean design which makes things really easy to sue. The market coverage for matches is good as well and whilst the lack of a match centre is an area that we would like to see addressed in the future, the ease in which you can track markets is great. It also highlights when markets have dropped or increased in price, making it much easier to see what’s going on and which games you can potentially target.

The site is no-frills, no-nonsense type of site and we think that’s a feature in itself. Sometimes less is more, especially in the modern day betting arena and we think that BetOnBrazil has a perfect balance between substance and style. It lacks the bells and whistles that a bet365 or Ladbrokes might offer you, but that’s not necessarily a bad thing!