The company have been around since 2015, so they are still very new to the sports betting sector of the industry. It’s been interesting to see their affiliation with Evander Holyfield and that he has been the face of Real Deal Bet since day one. Whether he plays much of a role in the day to day of the site, we highly doubt, but it’s still a fairly big coup for the company given that it’s a new brand.

The guys behind Real Deal Bet are actually successful bookmaker 10Bet. You’ve likely heard of 10Bet before and they have built up a huge reputation in the sports betting industry and are now one of the leading brands in that sector. But, the company behind them – another, we know – is that of Blue Star Planet LTD and it’s them who are essentially the brains behind the whole operation.

The company – Blue Star Planet LTD – are best known for offering up functional, if not a little militant style of sportsbooks, in terms of design at least. It’s clear to see that Real Deal Bet follows a similar sort of step as that of 10Bet using SBTech’s platform to power the bookmaker and in turn, really give them a solid footing in the industry.

Real Deal Bet is another exciting bookmaker that is making some really positive strides in the gambling industry. The lead face of the company is none other than former heavyweight champion of the world, Evander Holyfield. To be honest, it seems a pretty odd match up, but it does seem to be working as the company have reported that they have seen a ‘huge percentage’ of growth throughout 2015 and moving into 2016 as well. 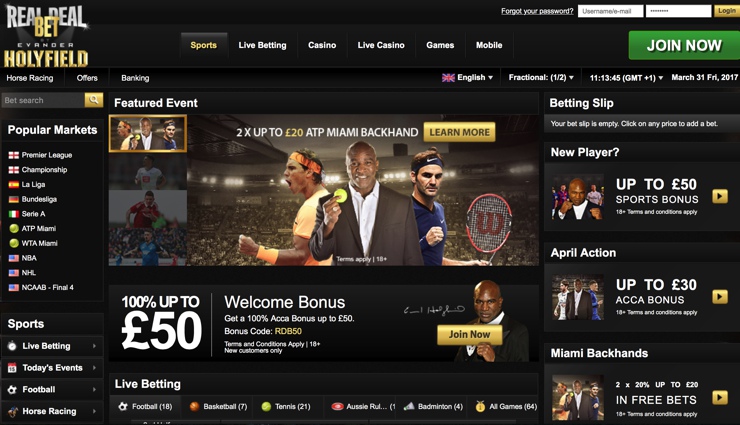 A real surprise package from Real Deal Bet was just how competitive they have become in the betting industry. They haven’t been around all that long, but the team behind the brand have clearly targeted their pricing structure as being somewhere that will get them far. They aren’t best priced in the industry, not by a long shot, but they are head and should above anyone bookmaker has arrived in the last couple of years and knocking on the door to some of the bigger, more established bookmakers in the industry. It’s not all good news for the pricing structure and we found the odd bet that we tested to be way off what you could get elsewhere, but on the whole, we were impressed.

The market coverage on this site is good, but it’s far from great. For example, we tested one upcoming Premier League match to see how it compared with more established brands, seeing that you could get 115 markets at Real Deal Bet is about half of what we found at some of their rivals. To be honest though, that number is still fairly impressive and we couldn’t really see any notable absentees form that list that we thought should be included. 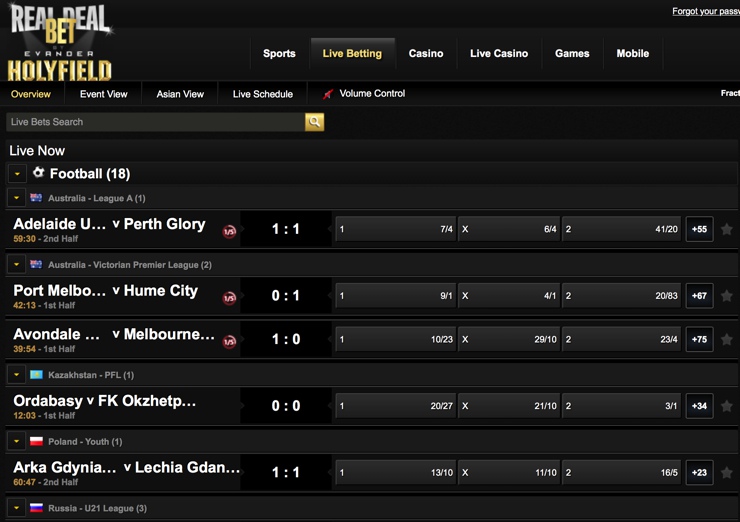 The live betting section has to be regarded as the ‘hub’ for Real Deal Bet and it’s here where the company seem to invest a lot of their time. The games on offer are massive and it looks like they bring a wide range of markets to bet in-play as well, which is great if that’s what you’re into as a punter.

The range of sports and markets that you are going to be able to bet on at the bookmaker is also of a good standard. Now, we aren’t going to stand here and say that they are up there with the likes of bet365, because they aren’t. But, what we will say is that 90% of bettors in the industry will be able to find exactly what they are looking for at Real Deal Bet in terms of both sports and the market coverage. The site does have a gravitational pull towards both horse racing and football, but then this is not uncommon with Euro facing bookmakers anyway.

The mobile app is another improving section of the bookmaker as well. You cant download the app fully, but you are able to simply visit the site on your mobile and you will be redirected to a mobile friendly version of the bookmaker. One thing to note with this though is that you don’t get every single betting market from the online bookmaker, but they claim to have over 4,500 live events every week, so you aren’t going to be left wanting here.

Live betting plays a huge roll in the makeup of Real Deal Bet and with this comes a plethora of both sports and markets to choose from. Football is where the in play section is strongest and you can expect to see pretty much every match that they cover pre game, turn in play. We did find a fairly large discrepancy on the number of markets that you could bet on however, with some of the higher profile games getting well over 50 at any one time and the lower profile matches struggling to hit 25.

The match centre that is on offer for all matches is a really strong addition and offers more stats than we think any other bookmaker in the industry at the minute. Some of the additional ones include offside, throw ins, substitutions, fouls, injuries, saves and free kicks.

The cash out feature has been recently added to the site as well, allowing punters to cash their bets out before that market has settled. This may be to lock in profit or simply to limit loses, but it’s a pretty huge feature in the industry these days, so we were pleased to see it on offer.  It would appear that you can use the cash out feature on all bets made on the site, but aren’t available to use on any system bets.