Kerching is a fast paced, action packed casino that has been operating since 2007. This is actually quite a long time for an online casino to be running, especially given the current, seemingly endless crop of new casinos that we see from day to day. The site is a little different from most and whilst many have headed down the route of offering a modern, simplistic look, Kerching goes against grain and is very much in your face.

In 2014, the company saw a pretty massive re-brand to bring them up to speed with todays market and we must admit, their methods have been somewhat controversial but we are all for anyone that is trying to be a little different in an industry that can be very repetitive. 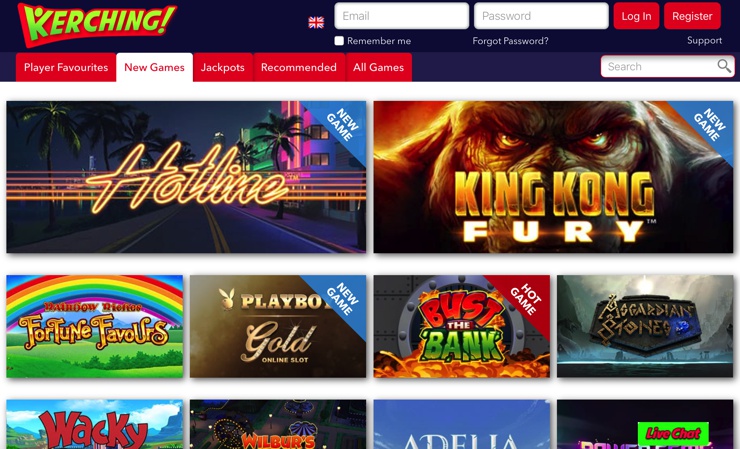 Kerching only utilise a couple of software providers that comes in the form of IGT, Wagerworks and NextGen. They aren’t the biggest developers in the industry, but they do offer up a decent range of games to choose from, especially NextGen who have won several awards over the years for their work within the industry. This all means that the casino will be available to play instantly via your websites browser and also via your smartphone, although the range of games on mobile will be significantly less than online.

The site includes a few nifty little features to make your time at Kerching that little bit easier, with the search function probably being the biggest standout. We loved the fact that you were able to quickly see the New games on offer from Kerching that seem to be added fairly regularly, which is also a welcomed addition. On top of that, you are going to be able to paly Demo’s of pretty much all the games on site, allowing new users or even players who are new to certain games to ‘try before you buy’.

The site has around 200 games in total, which is a fair amount, although when you compare it to some of their competitors, it does lack a little. The issue comes with the providers that they use and whilst they work well with other providers, as standalone offerings it does lack somewhat in terms of depth.

This is highlighted in the form of the distinct lack of table games on site, which really does leave them lagging behind most casinos. We know that slots are always going to be the most popular easiest to mass-produce, but if you are looking to find other games aside from video slots, you will need to look elsewhere.

As mentioned, the slots section makes up the vast majority of games on site and this is their saving grace to be honest. Whilst it only holds around 180 games in total, they quality of them are really good. You get some familiar faces such as Gonzo’s Quest, Starburst, Rainbow Riches and Aloha, along with some exciting new titles such as Black Widow and Bubble Craze.

You get 6 jackpot games to choose from in total, which include Cleopatra, Winstar, Siberian Storm, Isle of Plenty, Wolf Run and Genie. The jackpots will range between each up to £1,000,000 and run across the networks database, not just players on Kerching.

Kerching has been about since 2007, but as mentioned earlier, the re-design in 2014 has meant that they are now able to at least compete with the growing competition around them. The brand is actually part of the Nektan group who offer up a number of online casinos are abased out of Gibraltar.

The Nektan Group is one of the fastest growing networks in the industry at the minute and includes some big names, such as Green Dog Casino and Tiny Slots. They tend to create niche sites that target certain aspects of the casino industry, a bit like what they have done with Kerching and online slots.