Lucky Nugget are another casino that has been about as long as any, but have seen massive changes over the last few years. It’s worth noting that the casino does not accept players form the UK or the US, along with others, but they still accept a wide base of players from around the globe. They are part of the Digimedia Limited Group, which is one that has been thriving of late, with no fewer than 15 other brands to their name alone.

Throughout this review we will be looking to see how well the Lucky Nugget casino performs and if they are able to cater for a market that restricts two of the largest in the industry. 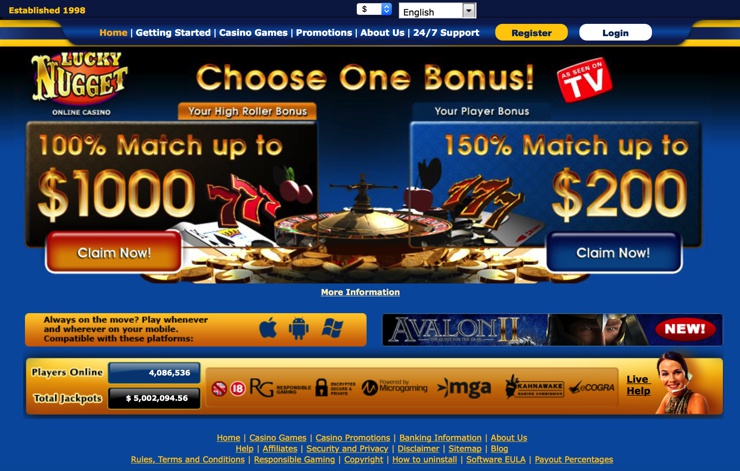 The software on offer comes in the form of Microgaming, who are one of the biggest companies in the industry when it comes to casino games. It’s tough to find any that will come near them when it comes to games packages, let alone beat them. This allows Lucky Nugget to offer up a huge range of games, of which we will discuss at length in the next section.

The casino comes in a download only format, which is pretty rare in this day and age. It also means that to download the software you are going to need a Windows based computer and if you are a Mac user, like some of you will be, I’m afraid you’re out of luck and you wont be able to access it. The saving grace comes in the form of mobile, which is available on Apple, Android and Windows devices. You wont get as wide a range of games with your mobile, but you can at least access some, which is clearly better than none if you are a Mac user.

Whilst the download only feature is a bit old school, we kind of liked the fact that you were able to submerge yourself in the casino and not be distracted by other websites. When you play in your browser you often have multiple sites fired up at once and flick between each, even when playing casino games. With the download it almost felt like you had fired up your favourite game and were settling in for a bit a session, which was nice, if not a little dated.

With over 300 games to choose from, you’re never really going to be left wanting at Lucky nugget. The site includes a good mix as well, from table games to slots and everything in between. What you will also find is that the games are updated regularly and considering that Lucky nugget are only offering up half of what the Microgaming network has to offer, it means that they are able to choose which games come in and which go out. This makes for a really diverse range of casino games and ones that are hand picked, providing quality over quantity.

The slots section is the largest on offer, with around 200 games to choose from. Again, not the biggest range of games, but still well worth getting stuck into. The games vary from classics, video, mega-spin and progressive games, allowing to pick from your favourite format. It’s worth noting that games from each format all offer up something slightly different, so should appeal to a fairly wide demographic.

Some standout games that we think you should be looking o try are Pharaohs fortune, Big Mamba, Double Magic, Immortal Romance and Avalon II.

The range of Blackjack games is good, but with just a dozen or so titles to choose from, it’s not as amazing as we had hoped. The reason we say this is because we know that Microgaming offer up well over 25 titles in total, which means that plenty have been omitted. Fair enough if we thought that Lucky Nugget had removed them under quality guiltiness, but we also know that each one serves a purpose and we think that they actually include some of the weaker games on offer, which is a shame.

The roulette range is strong, and it’s tough to really argue with the games that are on offer. Everything from classic to French variations can be played with most of them also being available via the mobile casino as well.

Video poker is another strong suit for the casino and whilst the graphics on offer for some of the games are a little dated, it’s tough to really criticise Lucky nugget for this as this is more down to Microgaming than anything else.

The jackpot game are the reason so many people flock to this casino, and with over a dozen games to choose from, its easy to see why. The jackpot games all run through the Microgaming network, so it means that millions of players are going to contributing to the pot, rather than just the players from this casino. Titles to look out for include Major Millions and Mega Moolah, both surpassing jackpots of €1,000,000 comfortably.

The Lucky Nugget casino has been about since 1998 and is a strong part of the Digimedia Group. The group has been one that’s continued to grow over the last decade or so and it’s been brands like Lucky Nugget that have enables them to branch out.

The problems occur when it comes to actually using the casino as it does feel a little dated. There is text on the homepage of the casino that clearly hasn’t been updated for some time, which is a massive indication that the casino is almost left to just tick over, and that is a crying shame.