Dunder Casino have only been about since March 2016, but in that short space of time have managed to provide a really solid online casino. They are utilising some of the best software in the industry, which is a massive plus, and they are able to offer up a range of games that will easily match that of some of the more established online casinos.

The site has been set up by two Swedish chaps, both with years of experience within the industry. What you’re going to find from Dunder Casino is a layout and design that is years ahead of their relatively short life span, making for a quality experience for all players. 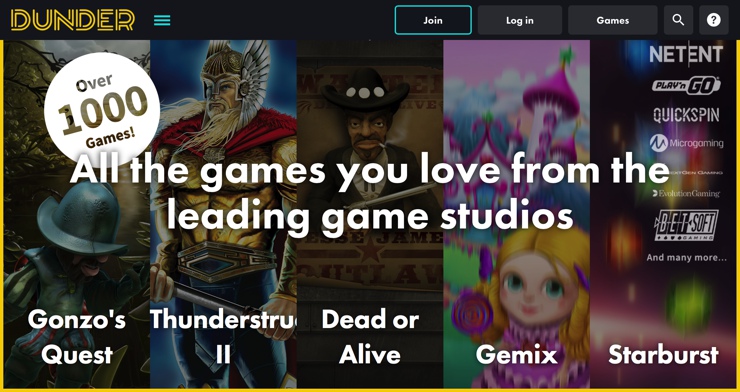 Dunder don’t actually include any other promotions on site other than their welcome offer, but we spoke to customer support who told us they occasionally offer ‘loyal customers’ promotions throughout the year via email. They wouldn’t divulge any further on what these offers might be exactly, but we would guess they were reload bonuses. Again, we cant say for certain what the ‘loyal’ criteria falls under, but we would expect it’s for players who are regular or high rollers. Be sure to sign up to Dunder Casino’s email list for a chance to check out these promotions.

The casino uses a number of software providers to power their games section, which include Betsoft, Evolution Gaming, Microgaming, NetEnt, NextGen and many more. What was pleasing to see throughout the casino is that they utilise the strengths from each provider to power each section. For example, the majority of slots are made up of NextGen and Microgaming, whilst table games are spread out amongst other providers.

The mix of providers means that the casino can be accessed via their instant play browser feature, which works seamlessly well and the interface is pretty rapid as well. You’re also going to be able to access the casino via your smartphone, although the number of games that are mobile friendly are significantly less than via the desktop casino.

Within the site you will be able to tap into a couple of nifty features, such as their search functionality, which allows you to instantly find the games that you are looking for. Each of the games are split up into separate categories as well and don’t just include ‘slots’,  ‘table games’ etc., but more like the type of game such as expanding wilds, blockbusters, free spins, classic slots, live casino and falling symbols. There aren’t many casino that include these functionality, so it’s been a welcomed bonus to see it.

The casino strength is its depth and at Dunder you are going to be able to tap into over 900 casino games across the board. It’s very rare to see a casino as young as Dunder offer so many games immediately like this, but it’s a great addition. With so many games, it actually makes them one of the largest online casinos in the industry in terms of depth, which should be a massive asset for the company moving forward.

You will find that they are constantly adding and subtracting games from the portfolio as well, which is imperative. The new games are easily tracked down within the casino and whilst it doesn’t signify the games that have been removed, they will likely be ones that gain little no traffic, so shouldn’t be an issue for most. 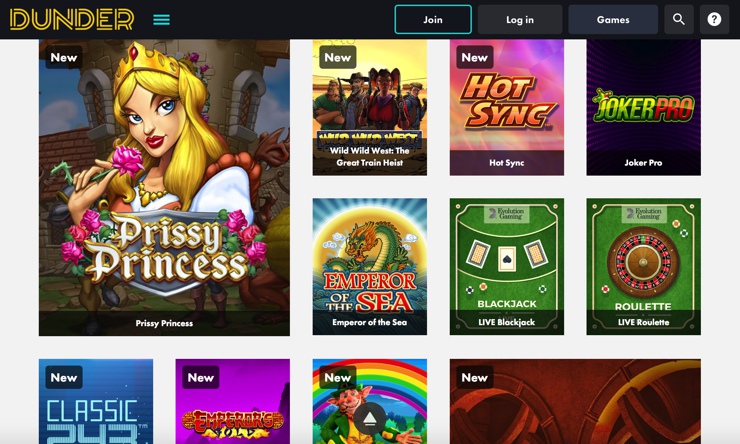 The slots section is where the vast majority of games can be found. It’s worth noting that with most of the games on site you are going to be able to access them for free play as well, which is a great way to get to know how a game functions before investing your money into them.

Due to the sheer size of the casino, the quality of games will vary depending on which provider it comes from. If possible we would suggest that you try games from Microgaming and NetEnt as it’s here where the most enjoyment was had for us at least. Some standout titles include South Park, Jurassic Park, Hitman and Zorro. Whilst these braded games are right up there with the best, don’t be afraid of tackling the non-branded slots as well as there are some real gems included, especially the likes of Gonzo’s Quest, Thunderstruck II and Starburst, to name but a few.

There are just 4 different blackjack variants on site that include Live Blackjack, Single Deck Blackjack Pro, Pontoon Pro and Blackjack Pro. This may not seem like an awful, but it should cover most the basis for the majority of players out there.

Roulette has slightly more games to choose from with 7, and titles include Live Roulette, European Roulette, Roulette advanced, French Roulette and Monopoly Roulette Tycoon. Again, not a huge range but should be enough for most punters.

The jackpot range includes 26 different games, which is one of the biggest that we have come across to date. They range from your main players such as Mega Moolah, Hall of Gods, Mega Fortune and Arabian Nights, all of which have jackpots well in excess of £1,000,000, to smaller games mainly played on fruit machines such as Treasure Nile, Golden Goal and Speed Cash. The latter have much lower jackpots, but are still well wroth winning.

Dunder Casinos short lifespan in the industry is actually quite interesting, given that they have such a massive database of games to choose from. They are actually owned by MT SecureTrade Limited, who themselves have made he strides with a number of other brands such as Guts, Betspin and Rizk, to name just a few.

The company are based out of Malta and are licensed by both the UK Gambling Commission and the Malta Gaming Authority, ensuring the highest levels of player safety possible.