Grosvenor is one of the most iconic casino brands in the industry. It’s probably best known for their brick and mortar casinos of which they operate 55 across the UK. The brand behind Grosvenor is that of the Rank Group, who in turn, also own Mecca Bingo, with a further 97 buildings situated throughout the UK and Ireland.

It’s actually quite interesting to see how many simply don’t realise that Grosvenor operate an online casino as well, but as you’re reading this, you will now know they do. It’s fair to say that it doesn’t have the same following of their land based casinos, but nonetheless, still provides a more than capable opportunity for pretty much any online casino player. 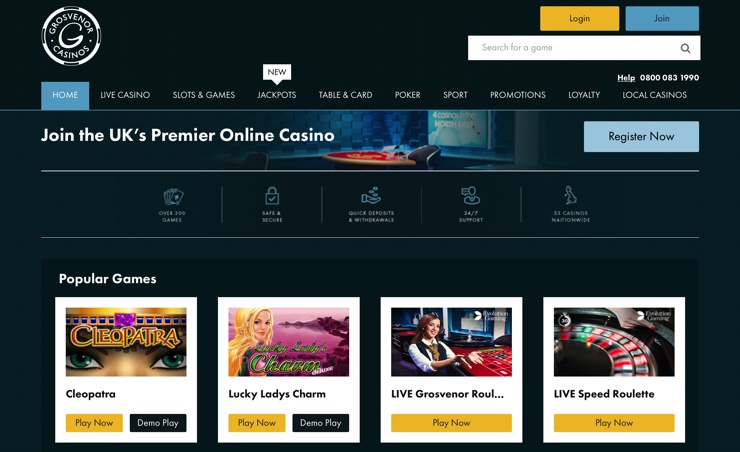 One thing that Grosvenor do really well is provide their users with a host of promotions to get stuck into. A lot of these are generally time sensitive and by this we mean that they might be running for a week and then disappear. To find out the latest offers you can head over to the promotions tab on the casino and see for yourself.

An example of some of the offers you can claim will be added bonuses to certain slots for a specific 24 hour period, double points days, increased win rates of certain slots and also improved welcome bonus offers, although we have only seen the latter occur once for a 24 hour period.

Grosvenor, like so many online casinos, have teamed up with a number of software providers to give as good a range of games as possible. These include Barcrest, Cryptologic, Electrade, IGT, Wagerworks and Novomatic. The mix of providers means that you can only access the casino via your browser for PC (no download available) but they also include a great mobile app, which can be accessed by any smartphone device. There is no dedicated download for the app, all you need to do is simply enter the casino within your smartphones browser and you will automatically be redirected.

The software includes a number of features to boot, with one of our favourites being that of the search functionality. This will allow you to search quickly for a specific game and bearing in mind how many there on site, saves a lot of time. We also liked the way you could demo play almost all of the games on the casino as well. If you are new to a certain game or new to online casinos in general, this is a must before using real money.

You’re going to be able to get a good range of games at Grosvenor without it ever being overcrowded. There are roughly 200 slots, about 20 table/card games and about 6 or so live casino games. 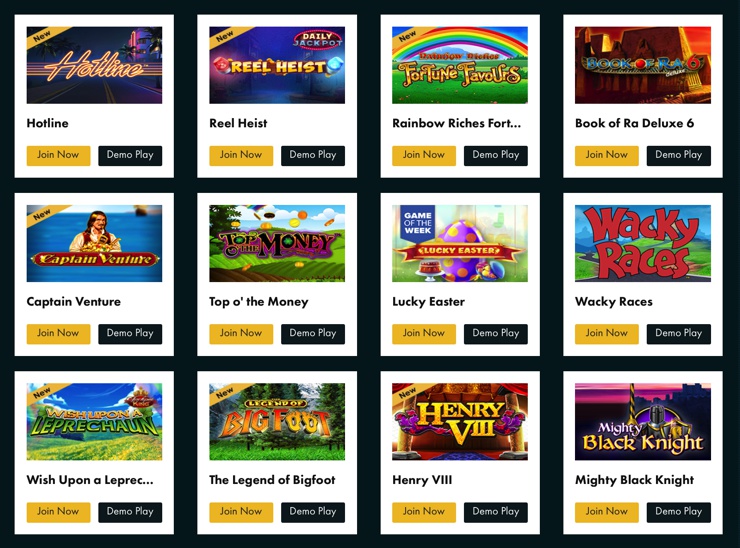 The slots section is main area for Grosvenor, as it is with a lot of online casinos. Because they use a number of software providers they are able to hand pick which games get the nod. As we mentioned, there are around 200 slots to choose from and if you compare that a number of their competitors, this number will seem low, but in the real world, it’s more then enough to get going. Some of our highlights included Gonzo’s Quest, Starburst, Medieval Money and Wild Times.

The jackpot section at Grosvenor is one of the best in the business with over 30 titles to choose from. Most of the games on site are actually networked based, which actually works in the favour of the punter due to the fact more people paly them, resulting in the jackpot amount increasing quicker as a result.

One of the biggest wins at the casino come from the Cleopatra MegaJackpot game where one lucky winner took home £683,000 jackpot from just a £20 stake. The winner has remained anonymous, but Grosvenor has reported that it was one of the biggest jackpot wins the casino had seen both online and land based.

As we reported earlier, the Grosvenor casino group run a really strong land based casino portfolio, with 55 casinos running throughout the UK. Their owners, Rank Group, also operate a number of land-based casinos throughout Europe, mainly in Belgium and Spain. As a result, the company employs over 6,000, with the majority of staff being placed throughout the brick and mortar casinos. 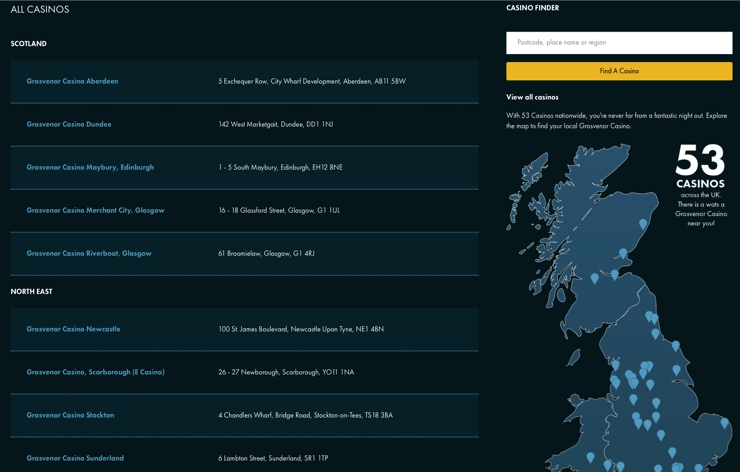 The company have been about since 1970 and now have one of the largest range of land based casinos in the world. Owned by Rank Group Ltd, together they have gone on to win several awards for their services in the casino sector such as Casino operator of the year in 2013 at the International Gaming Awards and their HR team winning Team of the Year at the Gaming Independent Annual awards in 2012.

The company have made some pretty monumental steps over the years and some that have also caused a fair amount of controversy along the way. This was probably highlighted most in 2009 when the company took the decision to leave the now defunct British Casino Association as protest to the companies increasing annual fees. This led a flurry of other companies to follow suit and sure enough as a result, the BCA soon folded.

The company are still based out of Maidenhead, England and are fully licensed by the UK Gambling Commission. In 2013 Grosvenor announced that they were to takeover 19 casinos from the Gala Group with a similar deal being penned in 2012 falling through due to the Competition Committee stepping in and limiting the number of premises in which they were allowed to buy.