Casumo have only been about since 2012, but in that short space of time have managed to create quite the stir in the online casino industry. The company are based out of Malta and as soon as you enter the site you can see that they are trying to do things a little differently from the masses of online casinos these days.

The site not only comes with it’s own unique design offering a modern view on casino games, but also they are much more social, with players encouraged to utilise chat features and also have recent results posted on the homepage ticker-roll. 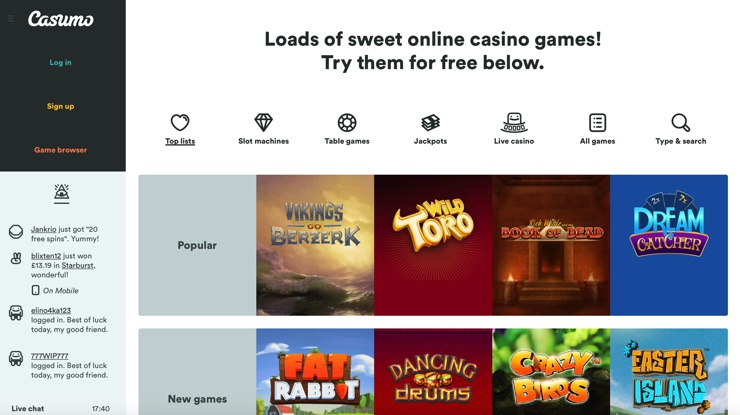 Casumo currently include a massive number of software providers, which are Microgaming, NetEnt, Evolution Gaming, Bally, Play’n GO, GreenTube, IGT (Wagerworks), WMS (Williams Interactive), NextGen Gaming, Barcrest Games, Quickspin, Thunderkick, Elk Studios and Quickfire. This means they are then able to offer up their casino as instant play version within your desktops browser, whilst at the same time offering a good range of games. As part of the casinos makeup you will be able to access a good range of games via their mobile app, which is one of the best that we have come across to date!

The site includes a pretty simple overlay if truth be told and whilst it looks good, it wasn’t packed with features like some of their more established rivals. However, we were impressed with the inclusion of a search feature on site, which allowed you to quickly find your favourite games and the social ticker on the desktop site was great for seeing latest wins and games people were playing.

We did like the fact that the site was probably the most sociable casino that we had played on. You are able to create an account and add things like an avatar and background, before your achievements and rewards get listed like trophies. You are able to switch this on and off if you would rather a bit more anonymity, but kudos to Casumo for thinking outside the box and offer features that very casinos currently do.

There are over 300 games to choose from at Casumo, which is a huge amount. What was most pleasing is that the majority of them come from NetEnt, who we think are one of the top 3 software providers in the industry at the minute. But, on top of that they put the other software providers to good sue, especially for more niche games away from online slots. For example, they use a lot of Microgamings jackpot games, of which we will talk about later in this review.

As there are so many software providers to choose from, the range of games often shifts quite a lot from month to month. We know that NetEnt often bring out at least 1 new game per month, but they aren’t afraid to swap out older games that have maybe seen better days for newer titles. 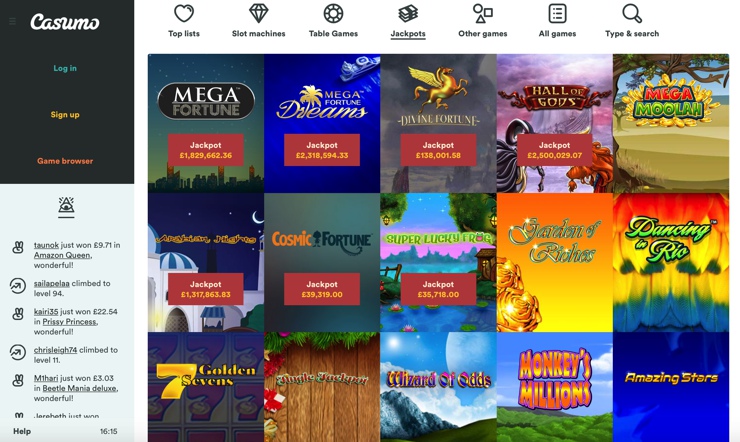 The slots section is where you are going to find the vast majority of games within Casumo. These games, as mentioned, are predominantly made up of the likes of NetEnt and Microgaming, which gives you an idea of the high quality that runs throughout this section.

What you are going to find is a good mix of familiar titles such as Starburst, Gonzo’s Quest and Pharaoh’s Fortune, with some slightly lesser, but equally entertaining games such as Medusa II, Gold Factory and The Lab.

Blackjack fans will be pretty happy with the range of games on offer as there are 13 different variations of the game. What’s good is that they aren’t all from the same software provider, so you will likely see differences in some games that are pretty much the same format. These may include low stakes, high stakes, double exposure, single deck and professional series.

Roulette follows a familiar trend to that of blackjack, with slightly more games on offer, but from a host of different providers. You can flick between French, American, European and Live games, to name but a few. What we will say about Roulette is that they have a much wider range of highs takes tables with different variations of the game than blackjack, so this is worth looking out for.

Video Poker has a decent range of games, but it’s not the biggest in the industry by any means. Variants include jacks or betters, jokers wild, deuces wild, American double up and All American 1 hand games.

On top of all of these you are getting a good mix of smaller games on site, that include Keno, Flying Pigs, Let It Ride, Pontoon, Super Wheel, Caribbean Stud Poker, Let It Ride and Three Card Poker.

As we touched on earlier, the majority of the jackpot games are powered by Microgaming, and as result they run across the Microgaming network. This means that the jackpots can get into some exponential figures, well into the millions and even tens of millions of pounds. With about 20 games to choose from, what was great to see is that they were all confined to that of online slots, but instead included some Caribbean stud Poker games, Mega Joker, Power Joker and Jelly Fruits.

Apart from the fact that Casumo have been about since 2012 and are based out of Malta, there isn’t an awful of information kicking about on the brand. But, one thing that we do know is that the casino has obviously been formed to try and create a bit of a stir in the industry.

We aren’t aware of many other sites that allow you to connect with the site in such a social manner as you are on Casumo, and whilst we know the casino industry can seem a little underground at times, this really does bring them into the 21st century and hopefully leads the industry forward, embracing social media within the site.