Club World might not be the first casino you think of when it comes selecting one of the oldest casinos in the industry, but you may be surprised to hear that they have been about since 2005. One of the backbones to their success has been the fact that they are part of one of the biggest casino groups in RTG (Real Time Gaming). These have essentially been the driving force behind the brand and the main reason why they are still competing today.

The site has seen many changes over the last few years, not least a re-design, which has allowed them to still challenge some of their bigger rivals. Throughout this review we will be looking at the ins and outs of Club World casino, looking at what it is that makes them tick and why RTG have been so keen to keep the brand running. 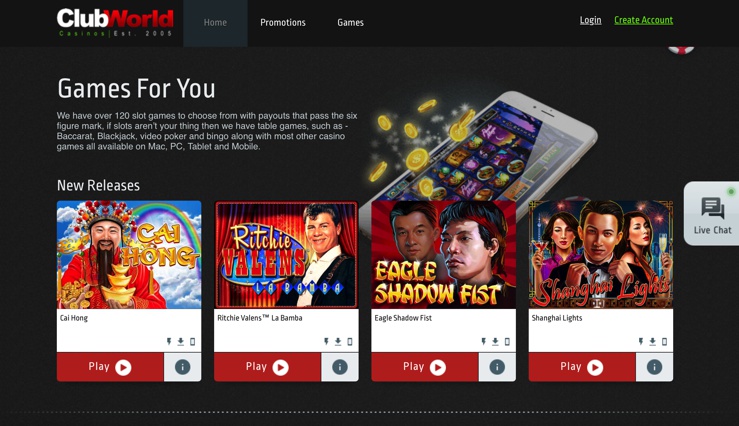 The site is part of the RTG group, which means that they exclusively use their won software. It’s pretty rare these days to see a casino online use one software provider, but even with just RTG powering Club World, you are still going to get pretty good access to a decent range of games. The site also comes with an Instant Play option, which means you don’t need to download any casino clients. This allows both Mac and Windows based users via their desktop computers to access all games. You will also be able to download the casino if you are using Windows based machines if you so wish.

You will be able to play a wide range of games on your mobile as well, which again doesn’t require you to download an app, simply just visit the site on your smartphones browser and you will be redirected to where you need to go. It’s wroth noting that RTG offer a huge range of games for mobile and even though the casino is fairly light, the range of mobile games is one of the best that we have seen.

There is a real community feel on site with Club World and you will be able to track recent winners and see which games are running hot. It also tends to highlight quite prominently how much the jackpots are running at, but we will talk more about these a little later in the review.

The casino only comes with around 100 games in total, which is small given the size of some of their competitors. We will state that the RTG do provide some of the best games in the industry and as they aren’t on every casino going, it does make for a pretty nice, refreshing change. They do tend to keep adding new games on a fairly regular basis and the RTG site states that they try and get at least one new release out every month. 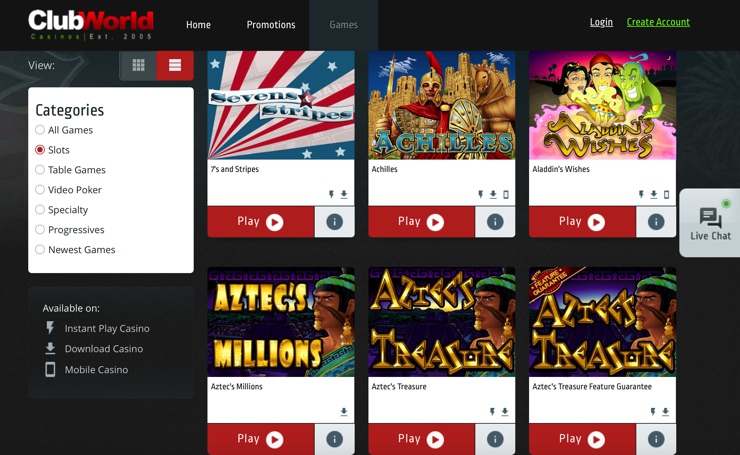 The slots section is going to see the most action within the casino and it’s here where you will find the biggest range of games. As we have already mentioned, the games on offer tend to be ones that you wont be all that familiar with if you haven’t tried any specific RTG casinos, but they should offer something for pretty much everyone. The themes on offer are pretty versatile and we liked the fact that most games didn’t take themselves too seriously, which added to the ‘fun-factor’ on site.

The standout slots for us were that of Lucky 6, Cash Bandits and Coyote Cash, all of which just so happened to have the highest RTP (Return To Player) percentages as well.

The table games section offer a decent range to be honest, but they do lack when it comes to depth. For example, there are only 4 blackjack variations and 5 roulette games, which isn’t too bad considering it’s from one provider.

On top of that you will be able to enjoy other table games such as Baccarat, Stud Poker, Keno, Scratchcards and long list of video poker titles as well.

There are 10 jackpot games in total, which mix between slots and table games. The jackpot games are all run throughout the RTG network, so they tend to rise pretty sharply. The games can often reach over the 7 figure mark for the more popular titles, but even the lesser ones should easily be in to 5/6 figure regions as well. We were pleased to see some variation in games in the form of Let Em ride and Caribbean Stud Poker as jackpot games as well.

The casino, as stated, has been about since 2005 and working as part of the RTG group has definitely allowed them to see the success that they have. Whilst as a standalone casino the site may seem a little bear, but if you factor in that it’s hitting a certain niche and demographic within the RTG it definitely begins to make a lot more sense.

One of the most unique things about Club World Casino is that they allow players from the US with their license on behalf of the Kahnawake Gaming Commission.