Created in 2009, Box 24 is an exciting casino brand that has been released by the equally exciting Engage Entertainment Group Inc. who are based out of the West Indies. What’s been impressive to see from Box 24 is their ability to not only offer a great range of products straight out of the ‘box’ but also the ability to keep improving offering up a good range of casino games in the process.

It’s definitely worth mentioning that Box 24 are open to US based players, which is a huge positive for punters in the US given the distinct lack of brands that they currently have at their disposal. 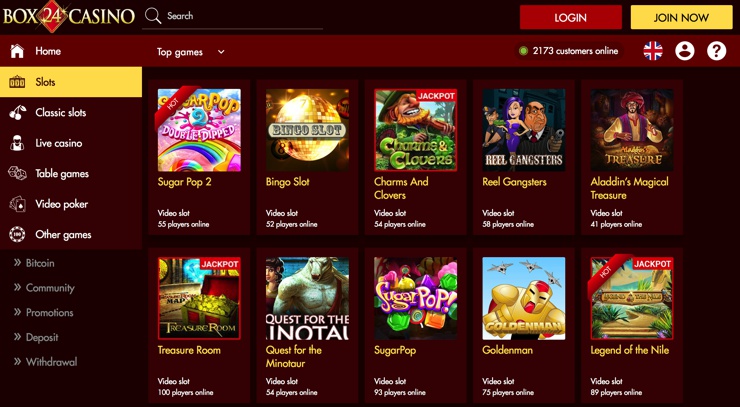 The site comes absolutely packed with promotions that you can take advantage of pretty much every week. What you will find is that each promotion will likely target a certain time of year, such as Christmas, Easter, Father’s Day and so on. You are able to click on the Archives button within the promotions section to see a list of previous offers, which will give you a better idea of what you can expect. Below we have listed some on-going offers that you will be able to claim at Box 24.

Like all good casinos, Box 24 will reward you with some great prizes for loyal play within the site. The VIP is one of the better ones that we have seen in the industry and with it comes 5 levels that you can work your way through; Bronze, Gold, Platinum, Ultimate and Ultimate +. With each level you are going to be able to unlock some slightly more prestigious prizes and from there you then get the chance to earn more money.

Every Tuesday, Thursday and Saturday you will be able to enrol in the VIP class of the titans where you go head to head against other players in the same VIP section as yourself. The aim is to earn as many points as possible throughout the day within the casino and the player who has earned the most will win the jackpot of just over £42,000. There are 20 places that are paid for this offer with money starting from as much as £500 for 20th.

Box 24 have been affiliated with Topgame since the companies first foray into online casino. These days they have managed to add in two more software providers in the form of Betsoft and Rival, two of the biggest providers allowing US based players. This means that the casino can be accessed from your desktop using their browser-based platform and also via your mobile simply by heading to the casino in your smartphones browser.

What’s nice about the casino is the ability to use their search functionality, allowing you to quickly jump to the game or even genre of game that you want to play. We also liked the fact that you were able to play the games for the free in demo mode. This meant that before you had to invest your cash, you could familiarise yourself with how each game functioned.

In total there are just shy of 200 games to choose from across the casino, which is a fairly decent amount without ever being amazing. What we did like was that because they use software providers that we weren’t all that familiar with, the games were mostly new and it felt very fresh as a result. If you are used to the more mainstream online casinos that are mainly Euro focussed, then you will be pleased to try the likes of Box 24 if only for a new range of games to play.

They seem to be pretty proactive when it comes to adding and removing games, and whilst the catalogue is fairly small in relation to some competitors, it should be more than enough to keep you fully immersed in a great online casino. 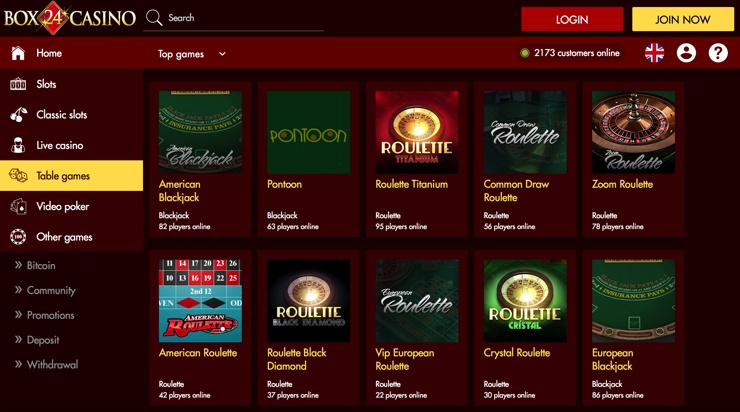 It wont come as any surprise to hear that slots makes up the main bulk of games on site. The quality of slots were actually very high throughout and as we mentioned, most we hadn’t come across before which really did add to the drama of finding something new in what’s a very repetitive industry sometimes.

Some of the standout titles for us included Black diamond, Lions Roar, Diablo 13, Birds and Gypsy Rose.

The selection of table games is the first real black mark that the casino gets from us and if you are big into these types of games, you are going to be left fairly disappointed. There are just 4 types of blackjack and 4 types of roulette to choose from, which isn’t a good sign given that these are the main two table games in the industry. We will say that what was there for both games was good, but the lack of depth was an issue for us.

Outside of the ‘Big 2’ you are going to enjoy games such as Craps, Casino War, Keno, Scratchcards and Baccarat. Whilst this range may seem more than reasonable, there are only 1 maybe 21 variations of each game, so it still feels fairly diluted.

The jackpot section on the other hand is great and not really because they offer a ton of games either, with just 8 to choose from, but more the fact that the jackpots on offer were simply huge. Most were well into the £1,000,000 mark and above, which isn’t something that we expected given the size and popularity of the networks on offer. Keep an eye out for Diablo 13 and Bingo Slot, which were two of our favourites.

The company have been about since 2009, which is now a fair amount of time in the online casino industry. The company are owned by Engage Entertainment Group, who are themselves linked to the Deck Media Group. All very confusing, but basically Deck Media have several thriving online casinos at the minute, with Box 24 being just another offering of these games.

The sites biggest appeal comes in the form of them accepting US based players, which is a rarity in the industry at the minute. To be honest, given the limited options that the US public face these days for online casinos, Box 24 is going to be a very good option for most and one we can see really kicking on over the next few years.